A safety lamp is any of several types of lamp that provides illumination in coal mines and is designed to operate in air that may contain coal dust or gases both of which are potentially flammable or explosive. Until the development of effective electric lamps in the early 1900s miners used flame lamps to provide illumination. Open flame lamps could ignite flammable gases which collected in mines, causing explosions and so safety lamps were developed to enclose the flame and prevent it from igniting the surrounding atmosphere. Flame safety lamps have been replaced in mining with sealed explosion-proof electric lights.

Within months of Clanny's demonstration of his first lamp, two improved designs had been announced: one by George Stephenson, which later became the Geordie lamp, and the Davy lamp, invented by Sir Humphry Davy. Subsequently, Clanny incorporated aspects of both lamps and produced the ancestor of all modern oil safety lamps.

George Stephenson came from a mining family and by 1804 had secured the post of brakesman at Killingworth colliery. He was present at both the 1806 and 1809 explosions in the pit. By 1810, he was engineman and responsible for machinery both above and below ground.The pit was a gassy pit and Stephenson took the lead in work to extinguish a fire in 1814. For some years prior to 1815 he had been experimenting on the blowers or fissures from which gas erupted. He reasoned that a lamp in a chimney could create a sufficient updraft that firedamp would not penetrate down the chimney. Further observations of the speed of flame fronts in fissures and passageways led him to design a lamp with fine tubes admitting the air.

Sir Humphrey Davy was asked to consider the problems of a safety lamp following the Felling explosion. Previous experimenters had used coal gas (chiefly carbon monoxide) incorrectly, believing it to be the same as firedamp. Davy however performed his experiments with samples of firedamp collected from pits. As an experimental chemist, he was familiar with flames not passing through gauze; his experiments enabled him to determine the correct size and fineness for a miner's lamp.

Both the Davy and Stephenson lamps were fragile. The gauze in the Davy lamp rusted in the damp air of a coal pit and became unsafe, while the glass in the Stephenson lamp was easily broken, and allowed the flame to ignite firedamp in the mine. Later Stephenson designs also incorporated a gauze screen as a protection against glass breakage.Developments, including the Gray, Mueseler and Marsaut lamps, tried to overcome these problems by using multiple gauze cylinders, but glass remained a problem until toughened glass became available.

Were the flame to go out in a lamp, then there was a temptation for the collier to relight it. Some opened the lamps to light tobacco pipes underground.Both of these practices were strictly forbidden; they clearly negated the whole point of the safety lamp. The miner was expected to return to the shaft to perform relighting, a round trip of up to a few miles. For men on piece work, this meant a loss of income (perhaps 10% of their day's pay) and so was unpopular. From the mid-century onwards, and particularly after the 1872 act, lamps had to have a lock mechanism which prevented the miner opening the lamp. Two schemes existed; either a special tool was required which kept at the pit head or else opening the lamp extinguished the flame. The latter mechanism can be seen in the Mueseler, Landau and Yates lamps below. Such a lamp was known as a protector lamp, a term picked up and used as a company name.Only on the return to the bank could the lamp man open the lamp for refilling and service. Various different locking mechanisms were developed; miners tended to be ingenious in finding ways of circumventing them. A number of additional lamps were supposed to accompany each gang of men, but restricting the number was an obvious economy for the pit owners.

The light given out by these lamps was poor (particularly the Davy where it passed through the gauze); indeed, in early lamps worse than candles.The problem not solved until the introduction of electric lighting around 1900 and the introduction of battery-powered helmet lamps in 1930. The poor light provided yet another reason for miners to try to circumvent the locks.

Early lamps (the Davy, Geordie and Clanny) had the gauze exposed to air currents. It was quickly discovered that an air current could cause the flame to pass through the gauze. The flame playing directly on the gauze heats it faster than the heat can be conducted away, eventually igniting the gas outside the lamp.

Following accidents such as Wallsend (1818), Trimdon Grange (1882) and the Bedford Colliery Disaster (1886), lamps had to be shielded against such currents. In the case of the Davy, a "Tin-can Davy" was developed which had a metal cylinder with perforations at the bottom and a glass window for the light from the gauze. Clanny derived lamps had a metal shield (typically tinned iron) in the shape of a truncated cone, called a bonnet covering the gauze above the glass cylinder.The important principle is that no direct current of air can impinge on the gauze. The shield had the disadvantage of not allowing the collier or the deputy to check that the gauze was in place and clean. Lamps were therefore made so that they could be inspected and then the bonnet placed on and locked.

In the Davy lamp a standard oil lamp is surrounded by fine wire gauze, the top being closed by a double layer of gauze.

If firedamp is drawn into the flame it will burn more brightly and if the proportions are correct may even detonate. The flame on reaching the gauze fails to pass through and so the mine atmosphere is not ignited. However, if the flame is allowed to play on the gauze for a significant period, then it will heat up, sometimes as far as red heat. At this point it is effective, but in a dangerous state. Any further increase in temperature to white heat will ignite the external atmosphere. A sudden draught will case a localised hot spot and the flame will pass through. At a draught of between 4 and 6 feet per second the lamp becomes unsafe.At Wallsend in 1818 lamps were burning red hot (indicating significant firedamp). A boy (Thomas Elliott) was employed to carry hot lamps to the fresh air and bring cool lamps back. For some reason he stumbled or moved the lamp too quickly and triggered the explosion.At Trimdon Grange (1882) a roof fall caused a sudden blast of air and the flame passed through the gauze with fatal results (69 killed).

Poor copies and ill-advised "improvements" were known, but changing dimensions either reduced the illumination or the safety.The poor light compared to either the Geordie or Clanny eventually led to the Davy being regarded as not a lamp but a scientific instrument for detecting the presence of firedamp.Some pits continued to use candles for illumination, relying on the Davy to warn men when to extinguish them. 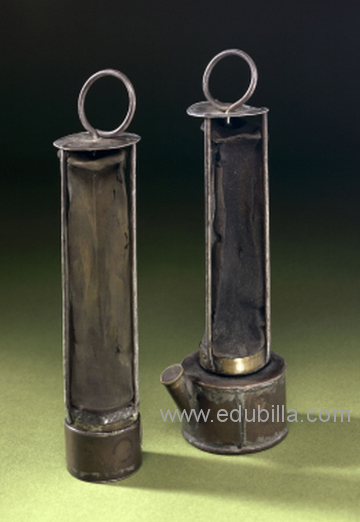 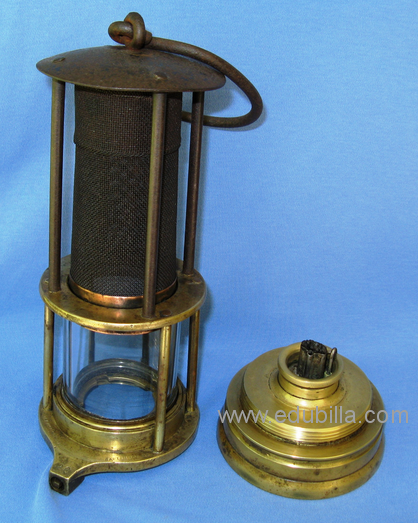