A bus is a road vehicle designed to carry many passengers. Buses can have a capacity as high as 300 passengers.The most common type of bus is the single-decker rigid bus, with larger loads carried by double-decker and articulated buses, and smaller loads carried by midibuses and minibuses; coaches are used for longer-distance services. Bus manufacturing is increasingly globalised, with the same design appearing around the world.

Horse-drawn buses were used from the 1820s, followed by steam buses in the 1830s, and electric trolleybuses in 1882. The first internal combustion engine buses, or motor buses, were used in 1895.Recently, interest has been growing in hybrid electric buses, fuel cell buses, and electric buses, as well as ones powered by compressed natural gas or biodiesel.

A short-lived early public bus line (known as a "carriage" at that time) was launched by Blaise Pascal in Paris in 1662; it was quite popular until fares were increased and access to the service was restricted to high-society members by regulation and law. Services ceased after 15 years and no further such services were known until the 1820s.

John Greenwood arguably established the first modern omnibus service in 1824. As the keeper of a toll gate in Pendleton on the Manchester-to-Liverpool turnpike, he purchased a horse and a cart with several seats, and began an omnibus service between those two locations. His pioneering idea was to offer a service where, unlike with a stagecoach, no prior booking was necessary and the driver would pick up or set down passengers anywhere on request. Later on, he added daily services to Buxton, Chester, and Sheffield. His line immediately sparked fierce competition and a dense network of omnibus services quickly sprouted in the area, often acting as feeders to the railways. In 1865, Greenwood's company and its competitors amalgamated into the Manchester Carriage Company.

In Nantes, a similar service to Greenwood's was established by Stanislas Baudry in 1826 and soon expanded into the Bordeaux region. By 1828, he was licensed by the city authorities of Paris for the provision of 10 services throughout the capital.The coaches used along this line were of innovative design; they were capable of transporting as many as two dozen people at a time and had three in-built compartments for the different paying classes.

The coaches were commissioned from the English engineer George Shillibeer, and were introduced into the streets of Paris in 1827. Shillibeer built another bus for the Quaker Newington Academy for Girls near London; this had a total of 25 seats, and entered history as the first school bus.

Whilst in Paris, Shillibeer concluded that operating similar vehicles in London, but for the fare-paying public with multiple stops, would be a paying enterprise, so he returned to his native city. His first London "Omnibus" took up service on 4 July 1829 on the route between Paddington (The Yorkshire Stingo) and "Bank" (Bank of England) via the "New Road" (now Marylebone Rd), Somers Town and City Road. Four services were provided in each direction daily. Shillibeer's success prompted many competitors to enter the market, and for a time buses were referred to as 'Shillibeers' despite Shillibeer having previously coined the term 'omnibus'.

Although passenger-carrying carriages had operated for many years, the new 'omnibus' pioneered a new service of picking up and setting down customers all along a particular route without the need to book in advance. Buses soon expanded their capacity, with additional seats for a few extra passengers provided alongside the driver. By 1845, passengers were being accommodated on the curved roofs, seated back to back in a configuration known as 'knife-board'. In 1852, Greenwood's in Manchester introduced the double-decker vehicle that could seat up to 42.

In Germany, the first bus service was established in Berlin in 1825, running from Brandenburger Tor to Charlottenburg.In 1850, Thomas Tilling started horse bus services in London,and in 1855, the London General Omnibus Company was founded to amalgamate and regulate the horse-drawn omnibus services then operating in London.

By the 1880s, bus services were a commonplace in England, continental Europe, and North America; one company in London was operating over 220 horse-buses. Horse-bus use declined with the advent of steam-buses and motor-buses; the last horse bus in London stopped operation in 1914. 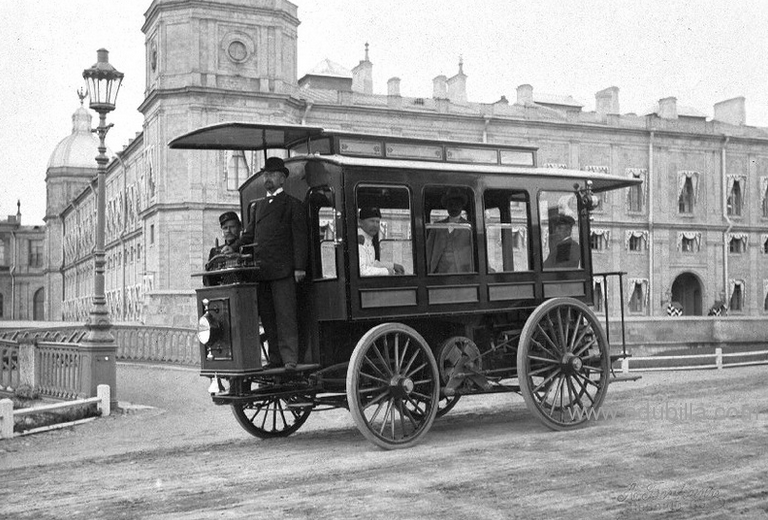 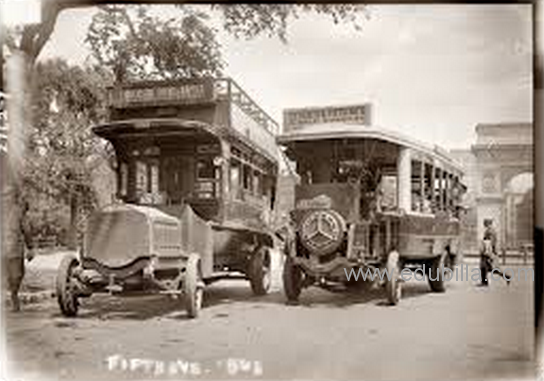