Robert Fulton (November 14, 1765 – February 24, 1815) was a colonial American engineer and inventor who is widely credited with developing the first commercially successful steamboat. In 1800, he was commissioned by Napoleon Bonaparte to design the ""Nautilus"", which was the first practical submarine in history.He is also credited with inventing some of the world's earliest naval torpedoes for use by the British Royal Navy.

Fulton became interested in steam engines and using them on steamboats in 1777 when he was around age 12 and visited state delegate William Henry of Lancaster, Pennsylvania, who himself had earlier learned about inventor James Watt, (1736-1819), and his Watt steam engine on a visit to England.

In 1769, the Scotsman James Watt patented an improved version of the steam engine that ushered in the Industrial Revolution. The idea of using steam power to propel boats occurred to inventors soon after the potential of Watt's new engine became known.

The era of the steamboat began in America in 1787 when John Fitch (1743-1798) made the first successful trial of a forty-five-foot steamboat on the Delaware River on August 22, 1787, in the presence of members of the Constitutional Convention. Fitch later built a larger vessel that carried passengers and freight between Philadelphia and Burlington, New Jersey.

John Fitch was granted his first United States patent for a steamboat on August 26, 1791. However, he was granted his patent only after a battle with James Rumsey over claims to the same invention. Both men had similar designs.

John Fitch constructed four different steamboats between 1785 and 1796 that successfully plied rivers and lakes and demonstrated, in part, the feasibility of using steam for water locomotion. His models utilized various combinations of propulsive force, including ranked paddles (patterned after Indian war canoes), paddle wheels, and screw propellers. While his boats were mechanically successful, Fitch failed to pay sufficient attention to construction and operating costs and was unable to justify the economic benefits of steam navigation. Robert Fulton (1765-1815) built his first boat after Fitch's death, and it was Fulton who became known as the ""father of steam navigation.""

Then came American inventor, Robert Fulton, who successfully built and operated a submarine (in France) in 1801, before turning his talents to the steamboat. Robert Fulton was accredited with turning the steamboat into a commercial success. On August 7, 1807, Robert Fulton's Clermont went from New York City to Albany making history with a 150-mile trip taking 32 hours at an average speed of about 5 miles-per-hour.

In 1811, the ""New Orleans"" was built at Pittsburgh, designed by Robert Fulton and Robert Livingston. The New Orleans had a passenger and freight route on the lower Mississippi River. By 1814, Robert Fulton together with Edward Livingston (the brother of Robert Livingston), were offering regular steamboat and freight service between New Orleans, Louisiana and Natchez, Mississippi. Their boats traveled at the rates of eight miles per hour downstream and three miles per hour upstream.

In 1816, Henry Miller Shreve launched his steamboat Washington, which completed the voyage from New Orleans to Louisville, Kentucky in twenty-five days. Vessel design continued to improve, so that by 1853, the trip to Louisville took only four and one-half days.

Between 1814 and 1834, New Orleans steamboat arrivals increased from 20 to 1200 a year. The boats transported cargoes of cotton, sugar, and passengers. Throughout the east, steamboats contributed greatly to the economy by transporting agricultural and industrial supplies.

Steam propulsion and railroads developed separately, but it was not until railroads adopted the technology of steam that they began to flourish. By the 1870s, railroads had begun to supplant steamboats as the major transporter of both goods and passengers. 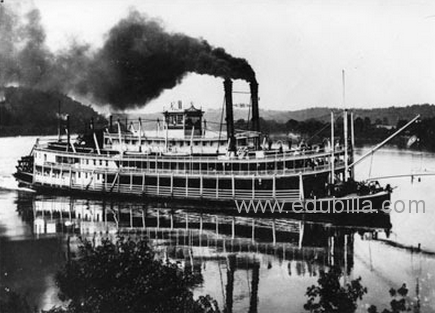 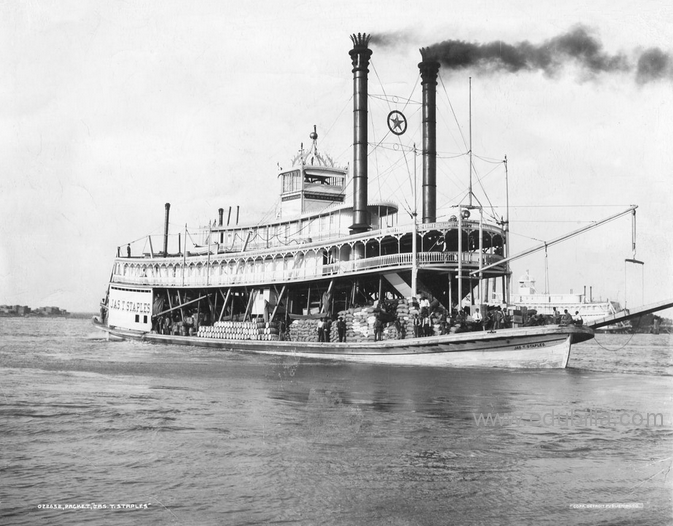