A safety bicycle is a type of bicycle that became very popular beginning in the late 1880s as an alternative to the penny-farthing or ordinary and is now the most common type of bicycle. Early bicycles of this style were known as safety bicycles because they were noted for, and marketed as, being safer than the high wheelers they were replacing.Even though modern bicycles use a similar design, the term is rarely used today, and may be considered obsolete.

The term safety bicycle was used in the 1880s for any alternative to the penny-farthing. The front and rear wheel were not necessarily the same size.Later historians began to use the term in a more restricted way, for the design that was a direct ancestor to most modern bicycles.

"Diamond frame" is also sometimes used as a term for safety bicycles, even though this technically only refers to a certain type of safety bicycle. The retronym "upright bicycle" is used to distinguish the style from recumbent bicycles.

The first bicycle to be called a "safety" was designed by the English engineer Harry John Lawson (also called Henry) in 1876,although other bicycles which fit the description had been developed earlier, such as by Thomas Humber in 1868.Unlike with penny-farthings, the rider's feet were within reach of the ground, making it easier to stop. The pedals powered the rear wheel, keeping the rider's feet safely away from the front wheel. The original model used treadles to transfer power to the rear wheel, the updated 1879 model used a chain drive, an important new technology that had previously only been used on tricycles. Lawson's safety failed to catch on, perhaps due to its increased cost, weight and complexity compared to the penny-farthing.

One other variation that appeared at about the same time is the dwarf, exemplified by the Kangaroo, and with a chain-driven front wheel.

By 1885, the safety bicycles cataloged in Henry Sturmey's Indispensable Handbook to the Safety Bicycle included seven with lever front-drives, 44 with geared front-drives, and only nine with chain rear-drives.In that same year, John Kemp Starley came out with the first commercially successful safety bicycle he named the Rover.It was heavier and more expensive than penny-farthings, but lighter and cheaper than tricycles of the day. In its original form it used indirect steering, later direct steering was adopted and the bicycle proved to be a hit.

The safety bicycle was a big improvement on the previous penny-farthing design which it replaced. The chain drive, coupling a large front sprocket (the chainring) to a small rear sprocket (the sprocket) to multiply the revolutions of the pedals, allowed for much smaller wheels, and replaced the need for the large, directly pedaled front wheel of the penny-farthing. The smaller wheel gave a harder ride; once pneumatic tires were developed and replaced the previously used solid ones, this disadvantage was no longer an issue.

With the center of gravity low and between the wheels, rather than high and over the front hub, the safety bicycle greatly diminished the danger of "taking a header" or long fall over the handlebars. This made braking more effective and cycling, previously the reserve of spry, daring young men, safer, and therefore much more popular, especially for women.

Compared with the tricycles of the time, popular with riders less willing to take risks, the safety bicycles were lighter, mechanically more simple, and less expensive.

Its popularity soon grew to be more than the penny farthings and tricycles combined, and caused the bike boom of the 1890s. 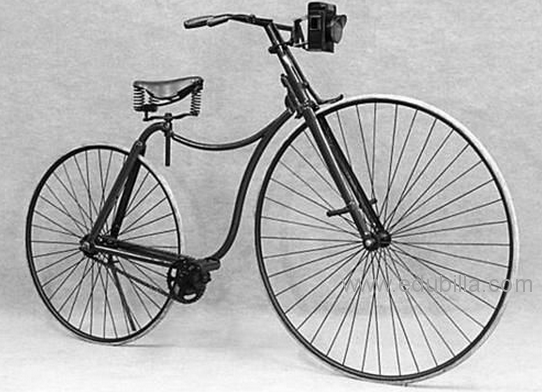 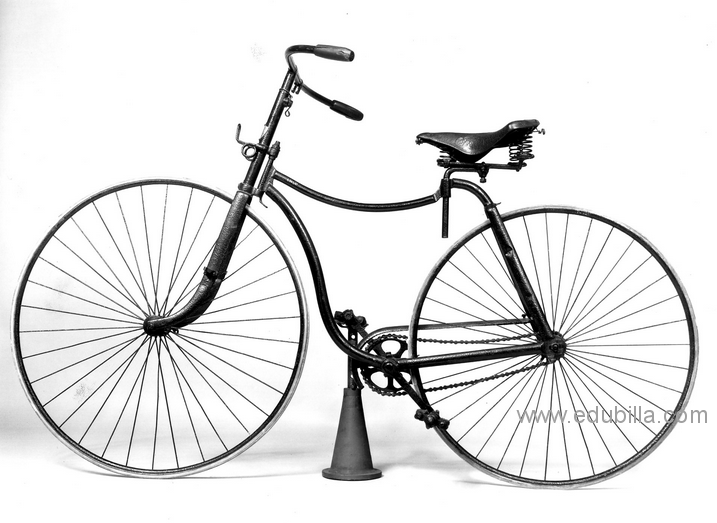