A jetboat is a boat propelled by a jet of water ejected from the back of the craft. Unlike a powerboat or motorboat that uses a propeller in the water below or behind the boat, a jetboat draws the water from under the boat into a pump inside the boat, then expels it through a nozzle at the stern.

Jetboats were originally designed by Sir William Hamilton (who developed a waterjet in 1954) for operation in the fast-flowing and shallow rivers of New Zealand, specifically to overcome the problem of propellers striking rocks in such waters.

A conventional screw propeller works within the body of water below a boat hull, effectively "screwing" through the water to drive a vessel forward by generating a difference in pressure between the forward and rear surfaces of the propeller blades and by accelerating a mass of water rearward. By contrast, a waterjet unit delivers a high-pressure "push" from the stern of a vessel by accelerating a volume of water as it passes through a specialised pump mounted above the waterline inside the boat hull. Both methods yield thrust due to Newton's third law— every action has an equal and opposite reaction.

In a jetboat, the waterjet draws water from beneath the hull, where it passes through a series of impellers and stators - known as stages - which increase the velocity of the waterflow. Most modern jets are single-stage, while older waterjets may have as many as three stages. The tail section of the waterjet unit extends out through the transom of the hull, above the waterline. This jetstream exits the unit through a small nozzle at high velocity to push the boat forward. Steering is accomplished by moving this nozzle to either side, or less commonly, by small gates on either side that deflect the jetstream. Because the jetboat relies on the flow of water through the nozzle for control, it is not possible to steer a conventional jetboat without the engine running.

Unlike conventional propeller systems where the rotation of the propeller is reversed to provide astern movement, a waterjet will continue to pump normally while a deflector is lowered into the jetstream after it leaves the outlet nozzle. This deflector redirects thrust forces forward to provide reverse thrust. Most highly developed reverse deflectors redirect the jetstream down and to each side to prevent recirculation of the water through the jet again, which may cause aeration problems, or increase reverse thrust. Steering is still available with the reverse deflector lowered so the vessel will have full maneuverability. With the deflector lowered about halfway into the jetstream, forward and reverse thrust are equal so the boat maintains a fixed position, but steering is still available to allow the vessel to turn on the spot - something which is impossible with a conventional single propeller.

Unlike hydrofoils, which use underwater wings or struts to lift the vessel clear of the water, standard jetboats use a conventional planing hull to ride across the water surface, with only the rear portion of the hull displacing any water. With the majority of the hull clear of the water, there is reduced drag, greatly enhancing speed and maneuverability, so jetboats are normally operated at planing speed. At slower speeds with less water pumping through the jet unit, the jetboat will lose some steering control and maneuverability and will quickly slow down as the hull comes off its planing state and hull resistance is increased. However, loss of steering control at low speeds can be overcome by lowering the reverse deflector slightly and increasing throttle - so you increase thrust and thus control without increasing boat speed itself. A conventional river-going jetboat will have a shallow-angled (but not flat-bottomed) hull to improve its high-speed cornering control and stability, while also allowing it to traverse very shallow water. At speed, jetboats can be safely operated in less than 7.5 cm (3 inches) of water.

One of the most significant breakthroughs, in the development of the waterjet, was to change the design so it expelled the jetstream above the water line, contrary to many people's intuition. Hamilton discovered early on that this greatly improved performance, compared to expelling below the waterline, while also providing a "clean" hull bottom (i.e. nothing protruding below the hull line) to allow the boat to skim through very shallow water. It makes no difference to the amount of thrust generated whether the outlet is above or below the waterline, but having it above the waterline reduces hull resistance and draught. Hamilton's first waterjet design had the outlet below the hull and actually in front of the inlet. This probably meant that disturbed water was entering the jet unit and reducing its performance, and the main reason why the change to above the waterline made such a difference.

Queenstown, New Zealand, where jetboats are used extensively for adventure tourism, claims to be the jetboat capital of the world, and jetboats are very common for many coastal and riverine tourism activities in the country, such as the Excitor in the Bay of Islands. 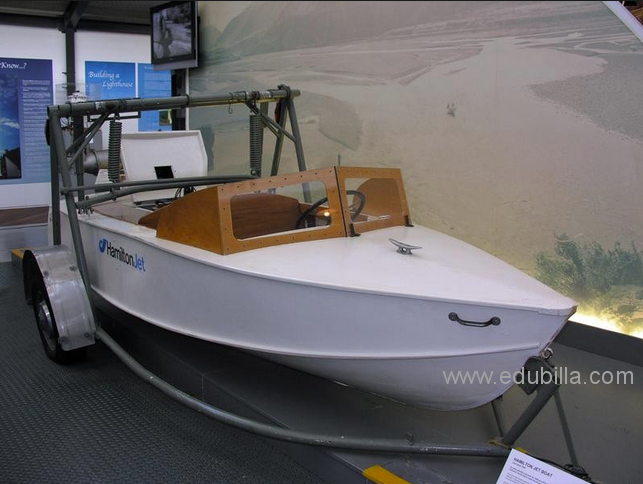 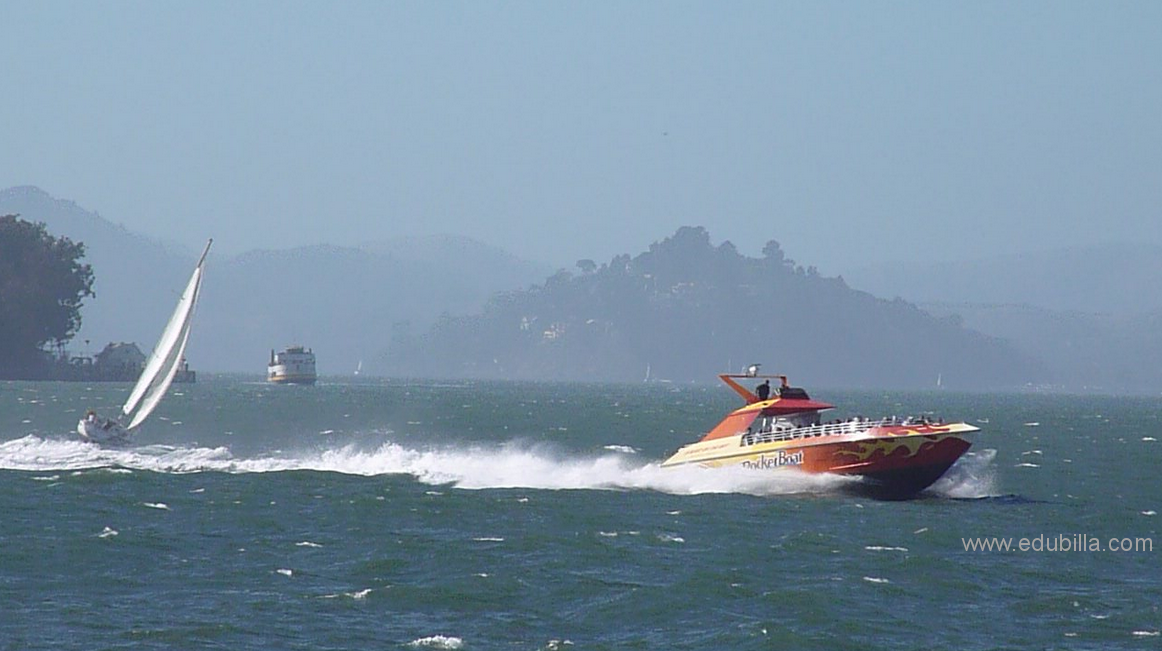