The Caspian Sea Monster also known as the "Kaspian Monster", was an experimental ekranoplan, developed at the design bureau of Rostislav Alexeyev.

The KM was designed in 1964 – 1965, and was unique in size and payload. The first spy photographs from American spy satellites showed a strange aircraft carrying letters "KM" on its fuselage. CIA disambiguated it as "Kaspian Monster", while it actually meant "Korabl maket" – "prototype ship" in Russian. The chief designer for this aircraft was Rostislav Alexeyev and the lead engineer was V. Efimov.

The ekranoplan had wingspan of 37.6 m, length – 92 m, maximum take-off weight – 544 tons. Until An-225 it was the largest aircraft in the world. It was designed to fly at an altitude of 5-10 meters in order to utilize the ground effect.

KM was designed as a special vehicle for the military and rescue teams. However designing such a machine caused serious difficulties. It was documented as a marine vessel and prior to the first flight a bottle of champagne was broken against its nose. It displayed the Soviet Navy Flag and was assigned to the Soviet Navy, since the ground effect is only possible within several meters from the surface. The new vehicle was, however, piloted by air force test pilots.

Alexeyev revolutionised the shipbuilding industry (though in secrecy) by inventing crafts that use ground effect, whereby a wing traveling close to the ground is provided with a better lift-drag ratio - thereby enabling a combination of greater aircraft weight for less power and/or enhanced fuel economy.

In his career working for the military he created a ten engine ekranoplan referred to at the time by American intelligence as "the Caspian sea monster".[citation needed] The KM or "korabl-maket", the largest ekranoplan ever built, was one of the first very successful vehicles designed by Alexeev and built by his Central Hydrofoil Design Bureau. The KM was intended as a test platform to examine the possibilities of the "Wing In Ground" (WIG) effect.

The KM, powered by eight Dobrynin VD-7 turbojets on the front of the fuselage, and two on the tail for extra thrust during take-off, first took to the air in October 1966. During its extensive test career, it was continually modified. The wingspan was altered to between 32m and 40m, and the length varied from 92m to 106m.

The KM crashed in 1980, apparently due to the pilot ill-advisedly attempting to take off without giving it full throttle. An attempt to recover the leviathan from the depths was thwarted by its vast weight. While the KM programme was ongoing, Alexeev began work on a medium-sized ekranoplan suitable for military transportation duties. Dubbed A-90 "Orlyonok" ("Eaglet"), the 140 tonne, 58 metre long aircraft had its maiden flight in 1972. The A-90 boasted two turbojets and one turboprop engine which propelled it to a speed of 400 km/h for 1,500 km at a cruise altitude of 5–10 m. 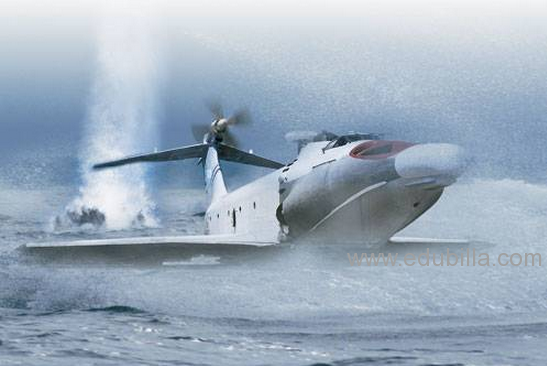 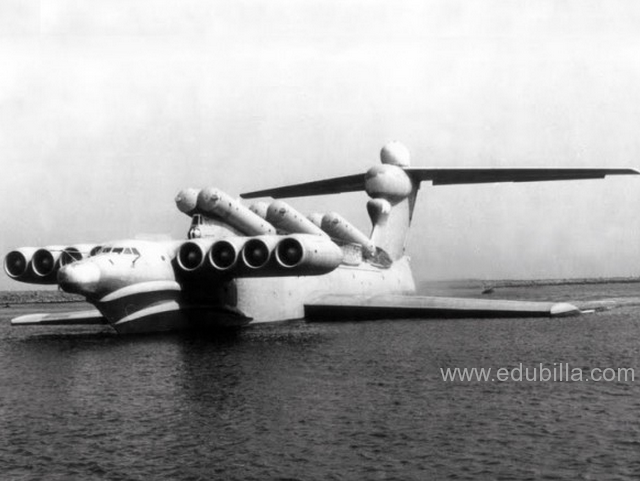