Motorcycle history begins in the second half of the 19th century. Motorcycles are descended from the "safety bicycle," a bicycle with front and rear wheels of the same size and a pedal crank mechanism to drive the rear wheel.Despite some early landmarks in its development, motorcycles lack a rigid pedigree that can be traced back to a single idea or machine. Instead, the idea seems to have occurred to numerous engineers and inventors around Europe at around the same time.

The first commercial design for a self-propelled bicycle was a three-wheel design called the Butler Petrol Cycle, conceived of and built by Edward Butler in England in 1884.He exhibited his plans for the vehicle at the Stanley Cycle Show in London in 1884, two years earlier than Karl Benz invented his first automobile who is generally recognized as the inventor of the modern automobile. Butler's vehicle was also the first design to be shown at the 1885 International Inventions Exhibition in London.

The vehicle was built by the Merryweather Fire Engine company in Greenwich, in 1888.the Butler Petrol Cycle (first recorded use of the term) It was a three-wheeled vehicle, with the rear wheel directly driven by a 5/8hp (466W) 600 cc (40 in3; 2¼×5-inch {57×127-mm}) flat twin four stroke engine (with magneto ignition replaced by coil and battery),equipped with rotary valves and a float-fed carburettor (five years before Maybach),and Ackermann steering,all of which were state of the art at the time. Starting was by compressed air.The engine was liquid-cooled, with a radiator over the rear driving wheel. Speed was controlled by means of a throttle valve lever. No braking system was fitted; the vehicle was stopped by raising and lowering the rear driving wheel using a foot-operated lever; the weight of the machine was then borne by two small castor wheels. The driver was seated between the front wheels.It wasn't, however, a commercial success, as Butler failed to find sufficient financial backing.

Another early internal combustion, petroleum fueled motorcycle was the Petroleum Reitwagen. It was designed and built by the German inventors Gottlieb Daimler and Wilhelm Maybach in Bad Cannstatt, Germany in 1885.This vehicle was unlike either the safety bicycles or the boneshaker bicycles of the era in that it had zero degrees of steering axis angle and no fork offset, and thus did not use the principles of bicycle and motorcycle dynamics developed nearly 70 years earlier. Instead, it relied on two outrigger wheels to remain upright while turning.The inventors called their invention the Reitwagen ("riding car"). It was designed as an expedient testbed for their new engine, rather than a true prototype vehicle. 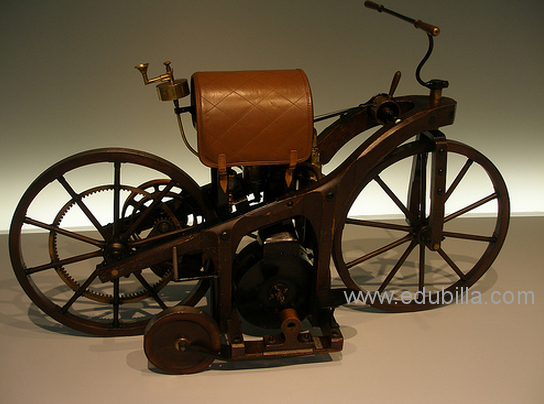 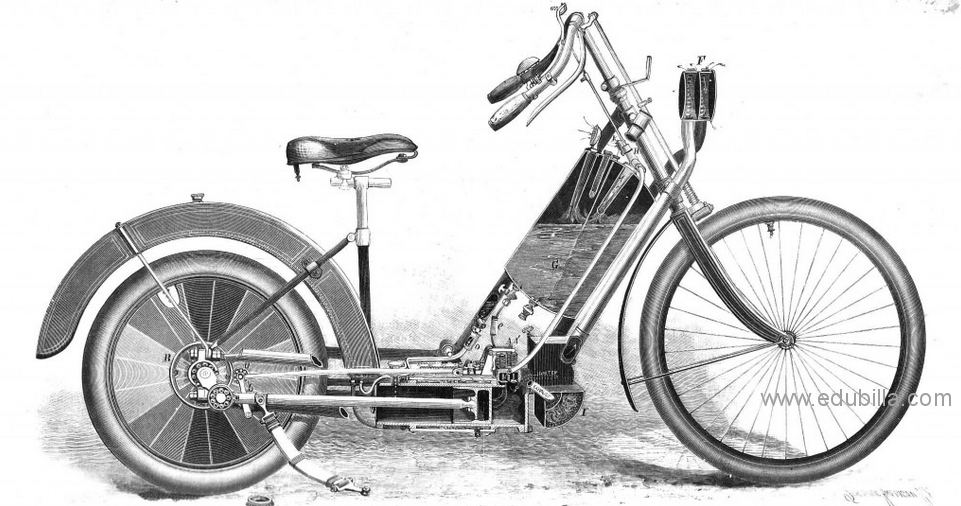