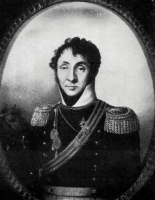 Stanislas Baudry , born 3 December 1777 to Vieillevigne in Loire-Atlantique , who died on 13 March 1830 in Paris , a former doctor and colonel of the First Empire, is a French businessman, pioneer of public transport with the opening in Nantes then in Paris liner made ??with horse carriages specially equipped, also owe their name to one part of omnibus .

His father, Charles Auguste René Baudry, is first surgeon (at the time, a sub-physician) from the town of Vieillevigne and who have obtained the degree doctor of medicine , has Machecoul, where the family moved in 1788.

Stanislas his secondary education at college Machecoul and then studied medicine in Nantes and Paris. He exercises as a soldier in Napoleon's army, especially during the campaign of France 3 in 1814. He reached the rank of colonel when the Restoration puts the retreat with the "half pay" as all officers deemed hostile to royalty.

Back in Nantes , he started in business by taking a flour mill in the neighborhood Richebourg (located along the current path Commandant Charcot , formerly "dock Richebourg," while the street Richebourg is behind the old wharf). This team flour mill with a steam engine called "fire pump Richebourg" and creates beside a bathhouse supplied with hot water by the condensation of water vapor generated by the steam engine his factory. Seeking to make profitable the bathhouse a bit far from the city center , he created at the beginning of 1826 a transport service with a car equipped for passengers, where it says "Bains de Richebourg". Free transport is the car performs regularly scheduled trips between "place of Port aux wines" (now Commerce Square ) and the establishment of Richebourg, the entrepreneur planning to recoup with the increase in entries its bathroom. In fact, many customers borrow the car just to get from one neighborhood to another, without going to the bathroom, because the Richebourg area is very active economically. Stanislas Baudry draws the conclusion that there is a market for a public transport company.

This company appears in public on August 10, 1826, after obtaining permission from the municipality to establish a car service in the streets of Nantes; he published a prospectus to inform potential investors . The company started operating on 30 September 1826  ; Stanislas Baudry is the principal shareholder and director ( the contractor , as the prospectus said). Initially, it establishes two lines: Rue de Richebourg-Salorges (along the Loire) and Bridge Fish (northeast of the island Feydeau ) - Tower Pirmil (through the Loire Islands). She rolled two suspension cars built to allow the transport of 16 passengers . Stanislas Baudry is also a communicator: to baptize his business, he borrows the name of the comic opera's hit Boieldieu , La Dame Blanche . The cars are painted white and bear the company name. The nickname omnibus however appears very quickly. The company is successful: from September 1826 to January 1828 , provided for a capital of about 23,500 francs , it showed a profit of 8,200 francs.

In 1827, he sought leave for Paris, but it is first rejected by the Delavau prefect. It was not until a change of government in January 1828 and the arrival of the prefect De Belleyme for the authorization is granted. The company then formed with the intervention of Parisian investors, the General Company bus from Paris absorbs the Nantes company. EGO, which Stanislas Baudry is still the director begins to operate its two Parisian lines the 12 April 1828 . They connect the Bastille to the Madeleine and the Carrousel . Eight months later, the company has 200 employees , 800 horses and 89 cars .

In February 1830 , the Parisian company is in a difficult situation, because of the appearance meantime several competitors and especially a harsh winter that makes up the price of fodder  ; threatened with bankruptcy, Stanislas Baudry suicide by shooting himself in the head in front of the stables of his company, on the banks of the Canal Saint-Martin ( Quai de Jemmapes ). In fact, the company continues beyond this crisis. In 1855, it is the essential element of the omnibus General Company , forerunner of the RATP Group (RATP).

He is buried in the Père-Lachaise ( 37 th Division).

The invention of "Omnibus"

The word "Omnibus" comes from what the Office of Stephen online or Stanislas Baudry, the main stop was in front of the trade of a hatter at the sign Omnes Omnibus  ; the owner of the premises with the name of Omnès, the translation of this Latin term (literally: "All for All") could be "Omnès for all" Employees have the habit of saying "I'm going to the omnibus", this habit has persisted during the installation of the lines of the White Lady . Stanislas Baudry uses when it creates and formalizes the General Contractor of the Omnibus in 1828.

However, no contemporary document categorically certify the origin from a commercial registration Omnes Omnibus the only thing certain is the first appearance of the word "  bus  "as part of the company created by Stanislas Baudry in 1828. A different version of the origin of the word is provided by an article published in the Bulletin of the Archaeological Society Nantes in 1892; this article also quotes a press text 1826 and a song on the bus 1828.