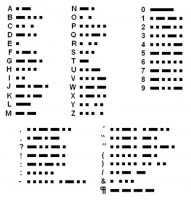 Morse code is a method of transmitting text information as a series of on-off tones, lights, or clicks that can be directly understood by a skilled listener or observer without special equipment. The International Morse Code encodes the ISO basic Latin alphabet, some extra Latin letters, the Arabic numerals and a small set of punctuation and procedural signals as standardized sequences of short and long signals called "dots" and "dashes", or "dits" and "dahs", as in amateur radio practice. Because many non-English natural languages use more than the 26 Roman letters, extensions to the Morse alphabet exist for those languages.

To transmit messages across telegraph wires, in the 1830s Morse and Vail created what came to be known as Morse code. The code assigned letters in the alphabet and numbers a set of dots (short marks) and dashes (long marks) based on the frequency of use; letters used often (such as “E”) got a simple code, while those used infrequently (such as “Q”) got a longer and more complex code. Initially, the code, when transmitted over the telegraph system, was rendered as marks on a piece of paper that the telegraph operator would then translate back into English. Rather quickly, however, it became apparent that the operators were able to hear and understand the code just by listening to the clicking of the receiver, so the paper was replaced by a receiver that created more pronounced beeping sounds.

Gerke perceived the disadvantages of the American Morse code and changed nearly half of it into its present form, the International Telegraph Alphabet. The original Morse code consisted of four different hold durations (the amount of time the key was held down), and some letters contained inconsistent internal durations of silence. In Gerke's system there are only "dits" and "dahs", the latter being three times as long as the former, and the internal silence intervals are always a single dit-time each. This new code was first adopted by the Deutsch-Oesterreichischer Telegraphenverein and in 1865 accepted by a convent of the International Telegraph Union in Paris. 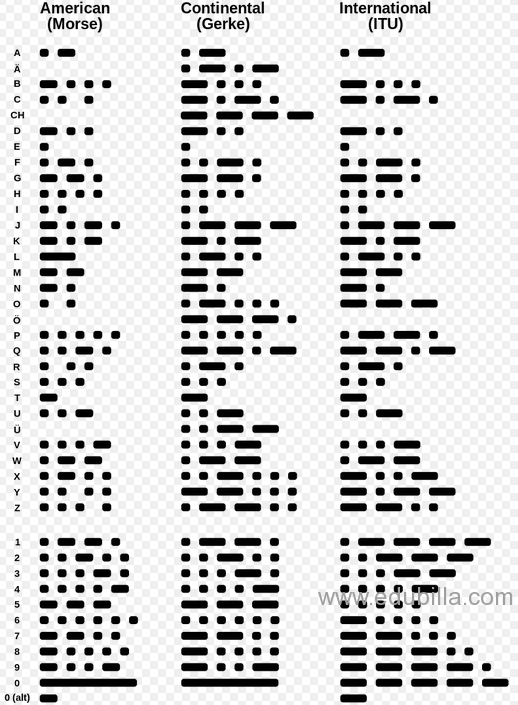