The electrical telegraph, or more commonly just telegraph, superseded optical semaphore telegraph systems, such as Claude Chappe's cables designed for communication among the French military, and Friedrich Clemens Gerke for the Prussian military, thus becoming the first form of electrical telecommunications. In a matter of decades after their creation, electrical telegraph networks permitted people and commerce to transmit messages across both continents and oceans almost instantly, with widespread social and economic impacts.

The first working electrostatic telegraph was built by the English inventor Francis Ronalds. He laid down eight miles of wire in insulated glass tubing in his garden and connected both ends to two clocks marked with the letters of the alphabet. Electrical impulses sent along the wire were used to transmit messages. He offered his invention to the Admiralty, describing it as "a mode of conveying telegraphic intelligence with great rapidity, accuracy, and certainty, in all states of the atmosphere, either at night or in the day, and at small expense." However, there was little official enthusiasm for his device in the aftermath of the Napoleonic Wars. He published an account of his apparatus in the 1823 Descriptions of an Electrical Telegraph, and of some other Electrical Apparatus.

The telegraph invented by Baron Schilling von Canstatt in 1832 had a transmitting device which consisted of a keyboard with 16 black-and-white keys. These served for switching the electric current. The receiving instrument consisted of six galvanometers with magnetic needles, suspended from the silk threads. Both stations of Shilling's telegraph were connected by eight wires; six were connected with the galvanometers, one served for the return current and one - for a signal bell. When at the starting station the operator pressed a key, the corresponding pointer was deflected at the receiving station. Different positions of black and white flags on different disks gave combinations which corresponded to the letters or numbers. Pavel Shilling subsequently improved its apparatus. He reduced the number of connecting wires from eight to two.

On 21 October 1832, Schilling managed a short-distance transmission of signals between two telegraphs in different rooms of his apartment. In 1836 the British government attempted to buy the design but Schilling instead accepted overtures from Nicholas I of Russia. Schilling's telegraph was tested on a 5-kilometre-long (3.1 mi) experimental underground and underwater cable, laid around the building of the main Admiralty in Saint Petersburg and was approved for a telegraph between the imperial palace at Peterhof and the naval base at Kronstadt. However, the project was cancelled following Schilling's death in 1837.Schilling was also one of the first to put into practice the idea of the binary system of signal transmission.

In 1833, Carl Friedrich Gauss, together with the physics professor Wilhelm Weber in Göttingen installed a 1,200-metre-long (3,900 ft) wire above the town's roofs. Gauss combined the Poggendorff-Schweigger multiplicator with his magnetometer to build a more sensitive device, the galvanometer. To change the direction of the electric current, he constructed a commutator of his own. As a result, he was able to make the distant needle move in the direction set by the commutator on the other end of the line.

At first, they used the telegraph to coordinate time, but soon they developed other signals; finally, their own alphabet. The alphabet was encoded in a binary code which was transmitted by positive or negative voltage pulses which were generated by means of moving an induction coil up and down over a permanent magnet and connecting the coil with the transmission wires by means of the commutator. The page of Gauss' laboratory notebook containing both his code and the first message transmitted, as well as a replica of the telegraph made in the 1850s under the instructions of Weber are kept in the faculty of physics of Göttingen University.

Gauss was convinced that this communication would be a help to his kingdom's towns. Later in the same year, instead of a Voltaic pile, Gauss used an induction pulse, enabling him to transmit seven letters a minute instead of two. The inventors and university were too poor to develop the telegraph on their own, but they received funding from Alexander von Humboldt. Carl August Steinheil in Munich was able to build a telegraph network within the city in 1835-6. He installed a telegraph line along the first German railroad in 1835.

Across the Atlantic, in 1836 an American scientist, Dr. David Alter, invented the first known American electric telegraph, in Elderton, Pennsylvania, one year before the Morse telegraph. Alter demonstrated it to witnesses but never developed the idea into a practical system.He was interviewed later for the book Biographical and Historical Cyclopedia of Indiana and Armstrong Counties, in which he said: "I may say that there is no connection at all between the telegraph of Morse and others and that of myself.... Professor Morse most probably never heard of me or my Elderton telegraph. 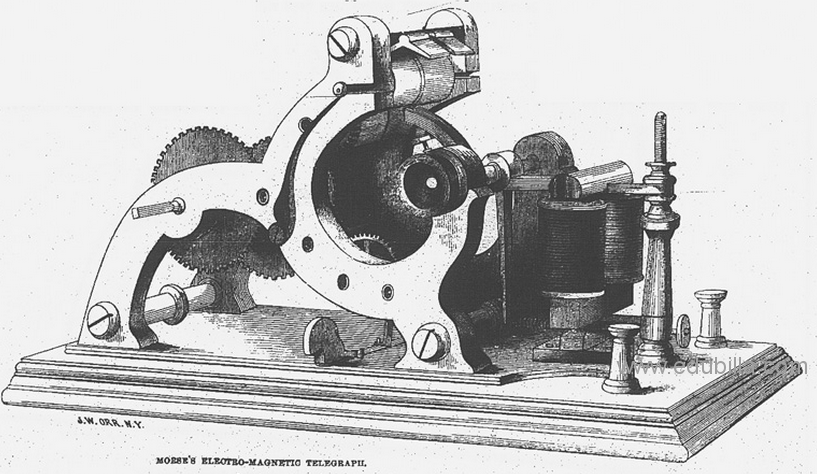 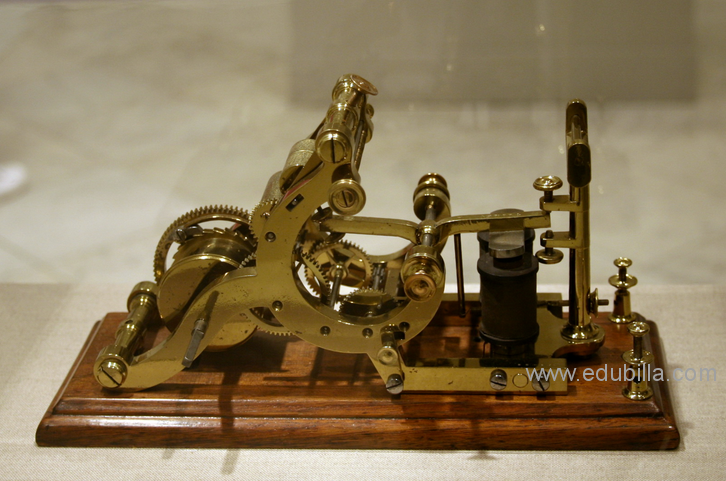