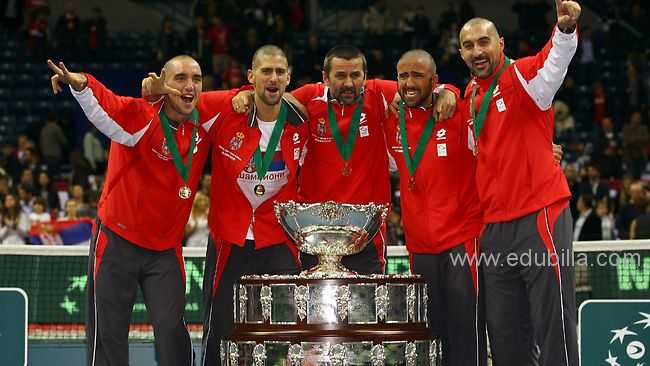 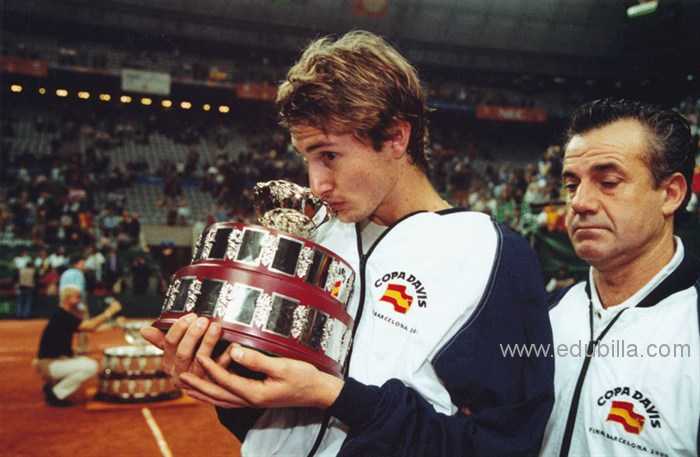 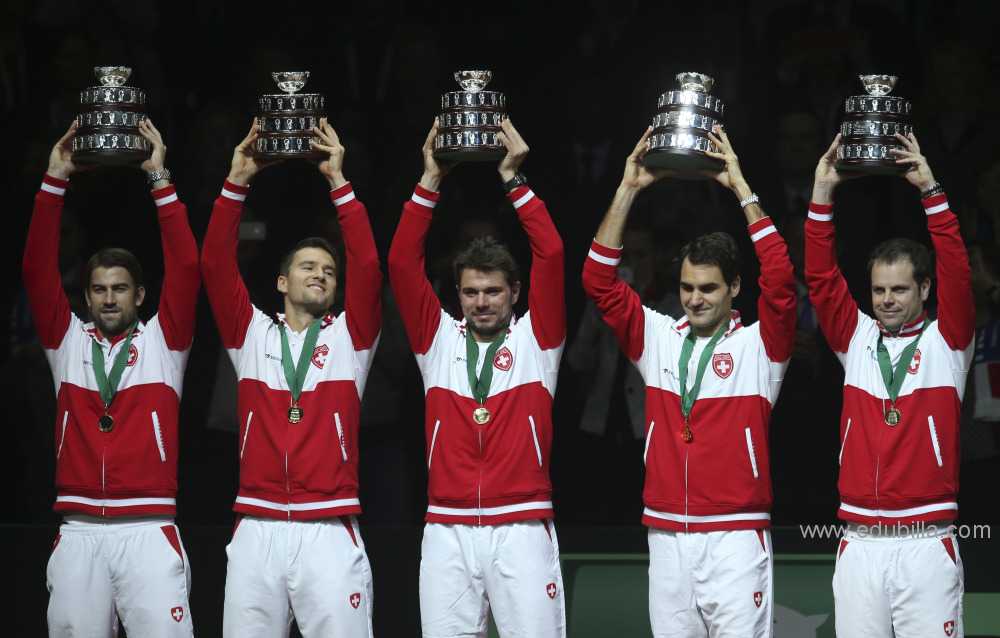 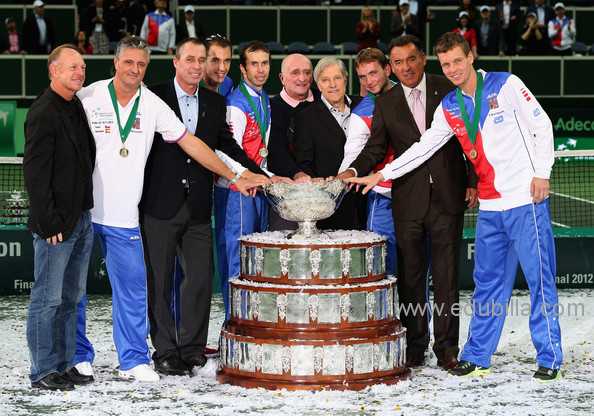 The Davis Cup is the premier international team event in men's tennis. It is run by the International Tennis Federation (ITF) and is contested annually between teams from competing countries in a knock-out format. The competition began in 1900 as a challenge between Great Britain and the United States. By 2013, 130 nations entered teams into the competition.

The first Davis Cup took place in 1900 and saw USA take on Great Britain, then playing under the name of the British Isles. It was held at the Longwood Cricket Club in Boston and the Americans surprised their opponents by racing into an unassailable 3-0 lead.

The idea of Davis Cup was conceived a year earlier by four members of the Harvard University tennis team, who wished to set up a match between USA and Great Britain. Once the two respective national associations had agreed, one of the four players, Dwight Davis, designed a tournament format and ordered a trophy, buying it with his own money.

The tournament was originally known as the International Lawn Tennis Challenge, but soon became known as Davis Cup after Dwight Davis’s trophy, which was designed by William Durgin and crafted by Rowland Rhodes.

In 1905, Davis Cup expanded to include France, Austria, Belgium and Australasia, a combined team of players from Australia and New Zealand. Then by the 1920s, there were over 20 nations regularly playing in the competition.

The early years were dominated by USA, Great Britain and Australasia, but that period was ended in 1927 by France. Led by the famous Four Musketeers – Jean Borotra, Jacques Brugnon, Henri Cochet and Rene Lacoste – France embarked on a glorious run of wins that lasted six years.

USA, Great Britain and Australia took control again from the 1930s and it wasn’t until the 1970s that any other nation triumphed. During this time, Australians Harry Hopman and Roy Emerson both entered the Davis Cup history books for winning more titles as captain and player respectively – Hopman won 16 and Emerson won eight.

In 2000, Spain won its first Davis Cup title before going on to claim four more victories and establish itself as the competition’s dominant force of recent times. During the last decade, Russia, Croatia, and Serbia also lifted the trophy for the first time, with the latter two being the only unseeded nations to win the title.

The competition celebrated its 100th Final in 2012, which also marked the start of the ITF's Centenary Year. Czech Republic overcame Spain 3-2 in a dramatic contest that went down to the wire at the O2 Arena in Prague. The final also saw the launch of the Davis Cup Commitment Award to recognise long-standing dedication.

BNP Paribas took over NEC as the competition’s Title Sponsor in 2002, a partnership that still flourishes today. The commercial programme continued to grow and now a family of sponsors support Davis Cup.

The introduction of the official Davis Cup website – DavisCup.com – also brought a new generation of fans to the competition, with live scoring, detailed match reports and photos showcasing the action from around the world.

The U.S. competed in the very first Davis Cup in 1900, when a group of Harvard University students challenged the British. They are the most successful Davis Cup team ever to compete in the Davis Cup, winning the coveted Davis Cup title on 32 separate occasions closely followed by Australia on 28.

The Great Britain Davis Cup team represents the United Kingdom in Davis Cup tennis competition and is controlled by the Lawn Tennis Association. The United Kingdom played in the very first International Lawn Tennis Challenge (as the tournament was known until 1945). They are the third most successful team in terms of championships won, with 9 (tied with France), but have appeared in only one final since 1937.

The Australian Davis Cup team is the second most successful team ever to compete in the Davis Cup, winning the coveted title on 28 separate occasions, second behind the United States with 32.

France is the third most successful nation, with 9 wins (tied with Great Britain). Their most recent title came in 2001.

In 2012 France will compete in the World Group for the 30th time out of 32 years, which ranks them in 5th place on this category.

The Great Britain Davis Cup team represents the United Kingdom in Davis Cup tennis competition and is controlled by the Lawn Tennis Association. The United Kingdom played in the very first International Lawn Tennis Challenge (as the tournament was known until 1945). They are the third most successful team in terms of championships won, with 9 (tied with France), but have appeared in only one final since 1937.

South Africa won the Davis Cup in 1974 by default as India withdrew from the finals as a sign of protest against apartheid policies. They currently compete in Group II of the Europe/Africa Zone. They competed in the World Group from 1995–1998.

The Sweden Davis Cup team represents Sweden in Davis Cup tennis competition and is governed by the Svenska Tennisförbundet.

Sweden is the 5th most successful nation, winning the title 7 times. 6 of these titles were since the creation of the World Group in 1981, the most of any nation during this period, with 53 wins (as of February 2007), Sweden hold the record for most wins in the World Group.

The Italy Davis Cup team represents Italy in Davis Cup tennis competition and are governed by the Federazione Italiana Tennis.

In 2007 Germany compete in the World Group for the 24th time out of 27 years which ranks them in 6th place on this category.

The Spain Davis Cup team represents Spain in the Davis Cup tennis competition and are governed by the Real Federación Española de Tenis, presided over by José Luis Escañuela.

Spain competed in the World Group for 16 consecutive years, from 1997 to 2014, which makes it historically one of the most powerful countries in the tennis world.

Spain defeated Argentina in the 2011 final, held for the second time in Seville, by a score of 3–1 to claim their fifth title, and the third in four years.

In 2014 Spain was relegated, dropping out of the World Group for the first time since 1996.

The Russia Davis Cup team represents Russia in Davis Cup tennis competition and is governed by the Russian Tennis Federation. The team started playing in 1993.

In 2007 Russia played in the World Group for the 15th consecutive year, the second-longest ongoing streak. They were ranked #1 in the Davis Cup ranking by the ITF.

The Croatia Davis Cup team represents Croatia in Davis Cup tennis competition and is governed by the Croatian Tennis Association. It is captained by Željko Krajan.Croatia won the Davis Cup once, in 2005.

The Serbian Davis Cup team represents Serbia in the Davis Cup tennis competition. From 5 June 2006 team is playing under name of Serbia, following the split of Yugoslavia.

Serbia won the Davis Cup title for the first time in 2010, defeating France 3:2 in the Final at Belgrade Arena.

They also been runner-up in 2013, when they were defeted by Czech Republic 2:3 in a hard-fought final in Belgrade.