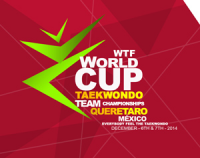 The World Cup Taekwondo Team Championships began in 2006, and is held every two years by the World Taekwondo Federation.

The participating male and female teams are divided into five groups each and the top four countries at the previous championship and the host country are seeded. Top five teams and three best-record teams among the second-placed teams in the men’s and women’s division of the preliminary round advance to the quarterfinal round. The quarterfinal, semifinal and final matches are conducted in a single elimination format.