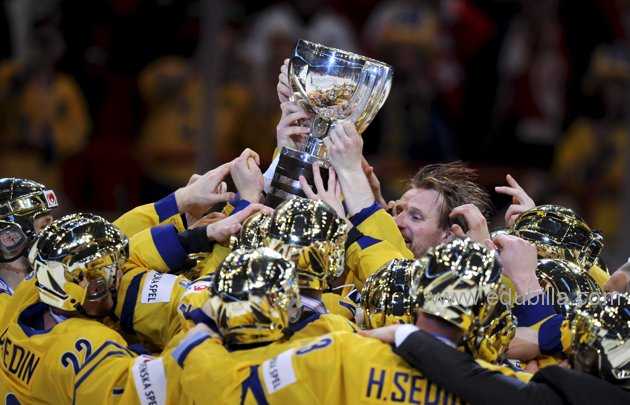 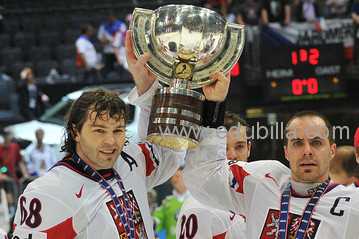 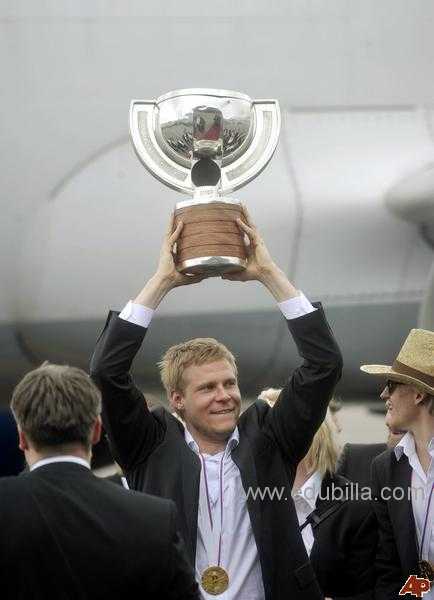 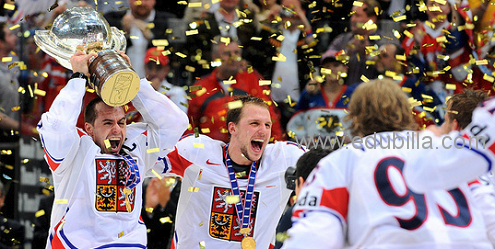 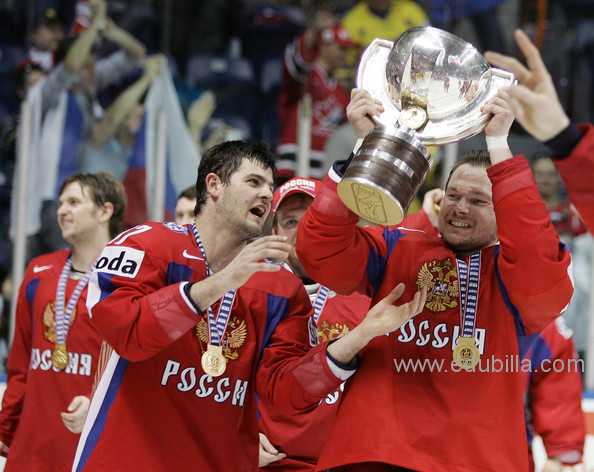 Over the years, the International Ice Hockey Federation has declared a world champion in men's ice hockey, either in conjunction with the Winter Olympics or as today, a separate event. Through time, the number of competitors has increased and the game has evolved, much like the World Championship trophy. With older trophies of this illustrious tournament retired from circulation, a new version was unveiled during the 2001 event.

The designer, Andr Richard, created this award to c,ompliment the World Championship's history and prestige. The handmade trophy weighs over 10 kilos and sports a silver and gold top portion and a base comprised from the precious woods ebony and bobinga.

The United States men's national ice hockey team is based in Colorado Springs, Colorado, with its U18 and U17 development program in Ann Arbor, Michigan. The team is controlled by USA Hockey, the governing body for amateur and Olympic ice hockey in the United States. The US team is ranked 6th in the IIHF World Rankings. The United States won gold medals at the 1960 and 1980 Winter Olympics and more recently, silver medals at the 2002 and 2010 Winter Olympics. The United States won the 1996 World Cup of Hockey but was unable to defend its title at the 2004 World Cup of Hockey, losing to Finland in the semifinals. The team's most recent medal at the World Championships came with a bronze in 2013. They won the tournament in 1933. Its current head coach is Dan Bylsma. As of 2007, the United States has a total of 480,038 registered ice hockey players (0.20% of its population).The United States is a member of the so-called "Big Seven", the unofficial group of the seven strongest men's ice hockey nations, along with Canada, the Czech Republic, Finland, Russia, Slovakia, and Sweden.

The team was a force on the international scene in the early 20th century, winning the first ever IIHF European Championship in 1910, finishing as bronze medalists at the 1924 Winter Olympics in Chamonix, and becoming Olympic champions in 1936 in Germany. The gold-medal winning Olympic team was composed primarily of dual-national British-Canadians, many of whom having learned and played the game in Canada.

The Czechoslovakia men's national ice hockey team was one of the world's premiere teams for the duration of its existence.

The successor to the Bohemian national ice hockey team, which was a European power prior to World War I, the Czechoslovak national team first appeared at the 1920 Summer Olympics, two years after the creation of the state. In the 1940s, they established themselves as the best team in Europe, becoming the first team from the continent to win two World Championships (1947 and 1949). After the arrival of the Soviet Union on the international hockey scene in the 1950s, the Czechoslovaks regularly fought Sweden and Canada for silver and bronze medals, but sometimes beat the Soviets. In total, they won the gold medal six times.

The Sweden men's national ice hockey team, or Tre Kronor (Three Crowns in Swedish), as it is called in Sweden, is one of the most successful ice hockey teams in the world. The team is controlled by the Swedish Ice Hockey Association, and it is considered a member of the "Big Seven", along with Canada, Russia, USA, Slovakia, Finland and the Czech Republic.

The name Tre Kronor means "Three Crowns" and refers to the three crowns on the team jersey. The three crowns represent the lesser national coat of arms of the Kingdom of Sweden and the national emblem. The first time the symbol was used on the national teams jersey was on 12 February 1938, during the World Championships in Prague.

The team has won numerous medals at both the World Championships and the Winter Olympics. In 2006, they became the first, and so far only, team to win both tournaments in the same calendar year, by winning the 2006 Winter Olympics in a thrilling final against Finland by 3–2, and the 2006 World Championships by beating Czech Republic in the final, 4–0

The Soviet national ice hockey team was the national hockey team of the Soviet Union. The Soviets were one of the leading teams of all time in international play. The team won nearly every world championship and Olympic tournament between 1954 and 1991 and never failed to medal in any International Ice Hockey Federation (IIHF) tournament they competed in.

After 1991, the Soviet team competed as the Unified Team at the 1992 Winter Olympics and as the Commonwealth of Independent States at the 1992 World Championship. In 1993, it was replaced by national teams for Belarus, Estonia, Kazakhstan, Latvia, Lithuania, Russia and Ukraine. The IIHF recognized the Russian ice hockey federation as the successor to the Soviet Union hockey federation and passed its ranking on to Russia. The other national hockey teams were considered new and sent to compete in Pool C.

The IIHF Team of the Century included four Soviet-Russian players out of a team of six. Goalie Vladislav Tretiak, defenseman Vyacheslav Fetisov and forwards Valeri Kharlamov and Sergei Makarov who played for the Soviet teams in the 1970s and the 1980s were voted on to the IIHF Centennial All-Star Team in a poll conducted by a group of 56 experts from 16 countries.

The Russian men's national ice hockey team is the national ice hockey team of Russia, and are controlled by the Ice Hockey Federation of Russia. They are currently rated number three in the IIHF World Rankings; with 3040 points. The team has been competing internationally since 1993, and is recognized by the IIHF as the successor to the Soviet Union Hockey Federation and have passed its ranking on to Russia. Today, it still follows a long tradition of Soviet hockey teams, composed mostly of Russian players. The Russian team replaced the Unified Team of the ice hockey at the 1992 Winter Olympics and the Commonwealth of Independent States team of the 1992 World Championships.

The Soviets were the most dominant teams of all time in international play. The team won nearly every world championship and Olympic tournament between 1954 and 1991 held by the International Ice Hockey Federation. Russia won the 2008, 2009, 2012 and 2014 World Ice Hockey Championships. Russia has a total of 63580 players, about 0.05% of its population. As of May 2014, their head coach is Oleg Znarok.