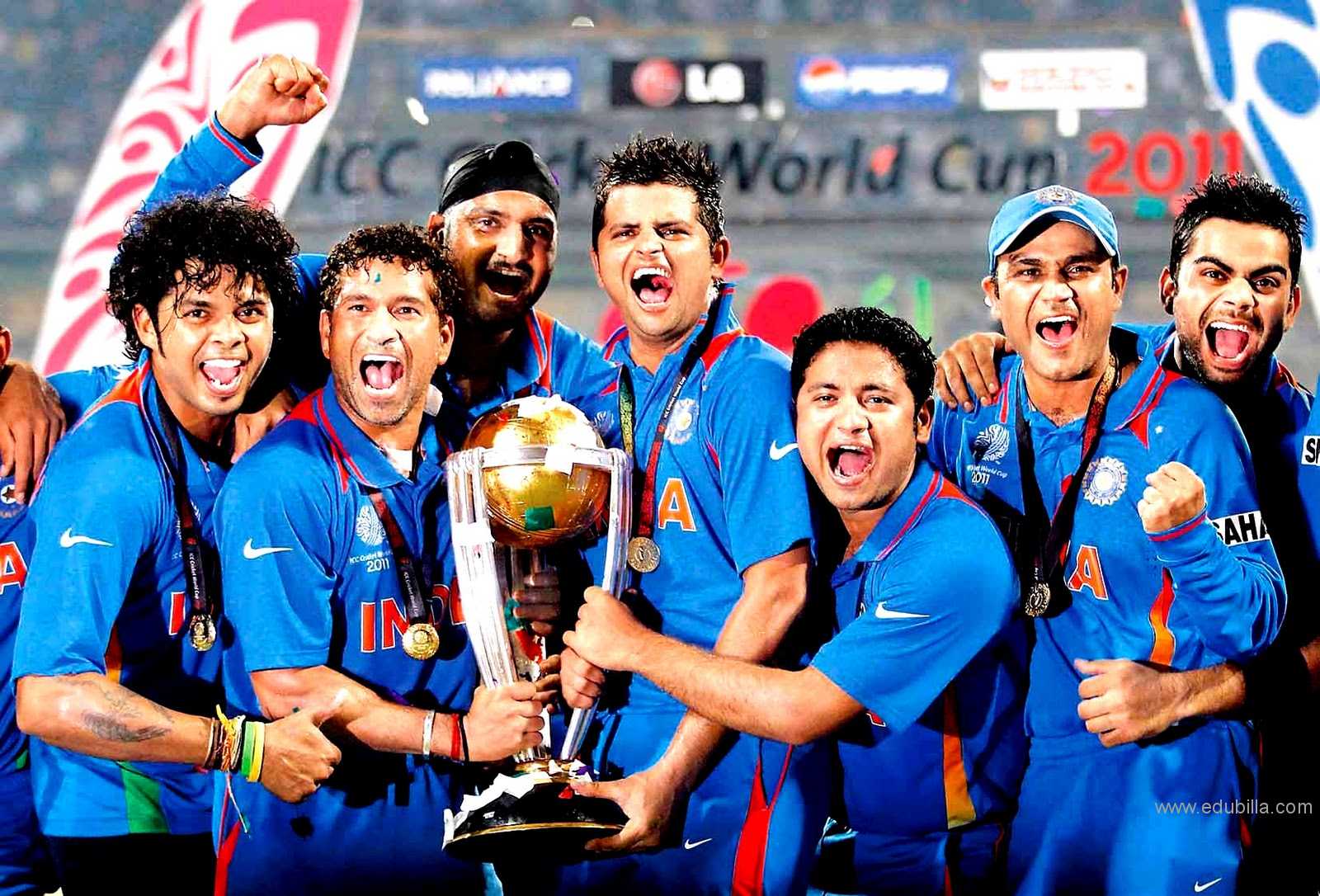 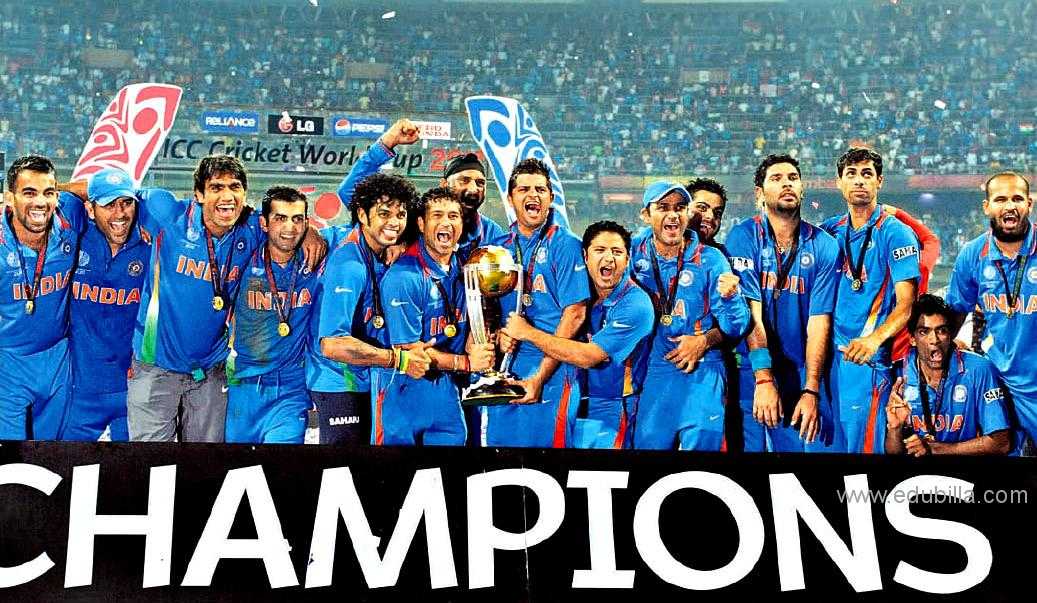 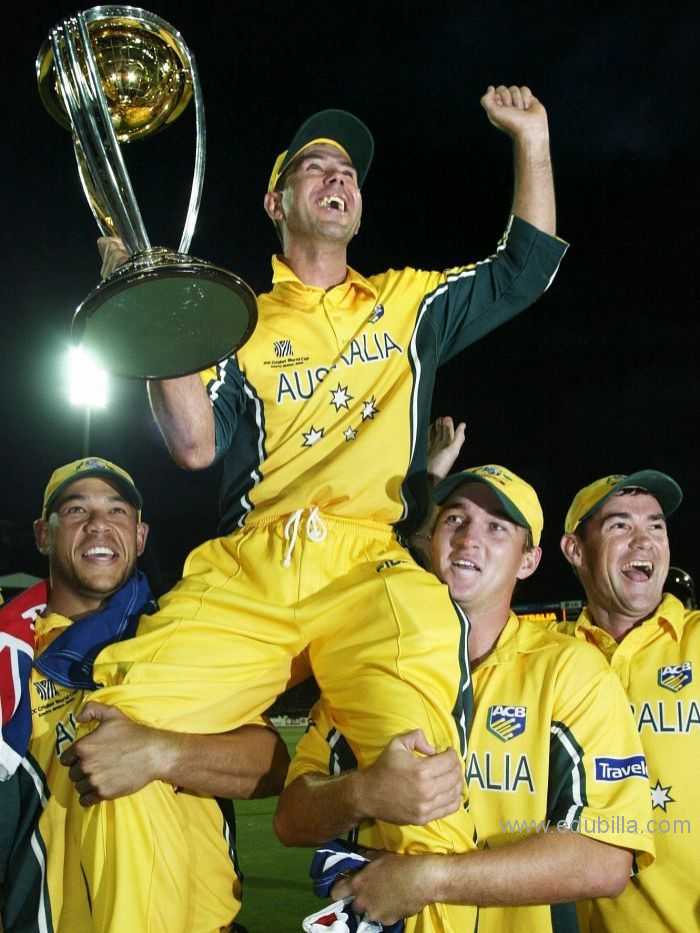 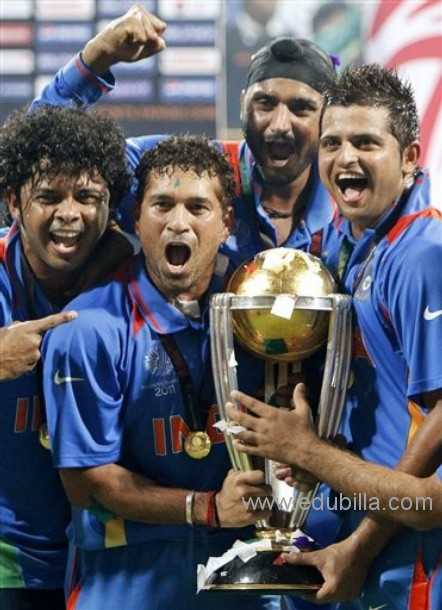 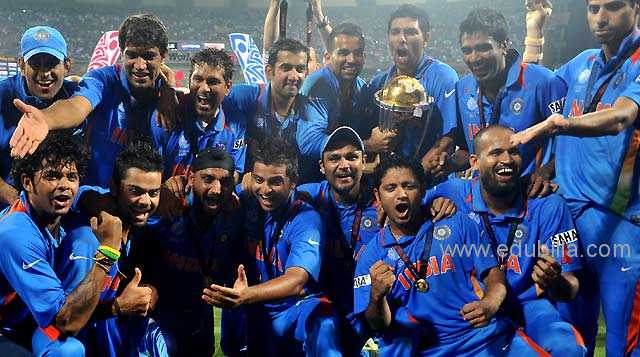 The ICC Cricket World Cup Trophy is presented to the winners of the World Cup finals. The current trophy was created for the 1999 championships, and was the first permanent prize in the tournament's history; prior to this, different trophies were made for each World Cup.The trophy was designed and produced in London by a team of craftsmen from Garrard & Co over a period of two months.

The Prudential Cups trophy were awarded to the winners of the World Cup from 1975-1983 when Prudential plc was the primary sponsors. The trophies' designs changed when the sponsors changed until the 1999 World Cup. So the first three world cups had a similar trophy while 1987 (Reliance World Cup sponsored by Reliance Industries), 1992 (Benson and Hedges Cup, sponsored by Benson and Hedges) and 1996 (Wills World Cup, sponsored by Wills, an ITC brand) had different trophies because of different sponsors until the International Cricket Council decided to award its own trophy

The 1987 Cricket World Cup (also known as the Reliance World Cup for sponsorship reasons) was the fourth edition of the ICC Cricket World Cup tournament. It was held from 8 October to 8 November 1987 in India and Pakistan – the first such tournament to be held outside England. The one-day format was unchanged from the eight-team 1983 event except for a reduction in the number of overs a team played from 60 to 50, the current standard.

The Benson & Hedges Cup was a one-day cricket competition for first-class counties in England and Wales that was held from 1972 to 2002, one of cricket's longest sponsorship deals.

It was the third major one-day competition established in England and Wales after the Sunday League and the Gillette Cup. Traditionally a 'big day out' for the finalist's supporters, it was the less prestigious of the two cups. It began as a 55 over a side game, but was later reduced to 50. The winning team in the first cup final in 1972, Leicestershire won £2,500, the losing finalists Yorkshire £1,000 and Chris Balderstone, winner of the man of the match – the coveted 'Gold Award' – £100.

Sri Lanka have won the Wills World Cup Trophy in 1996

The ICC Cricket World Cup Trophy is presented to the winning team of the ICC Cricket World Cup. The current trophy is 60 cm high, is made from silver and gold, and features a golden globe held up by three silver columns. The columns, shaped as stumps and bails, represents the three fundamental aspects of cricket: batting, bowling and fielding, while the globe characterises a cricket ball.It is designed with platonic dimensions, so that it can be easily recognised from any angle. The trophy weighs approximately 11 kilograms and has the names of the previous winners inscribed on its base. There is still room for another ten teams to have their name inscribed.

The Australian team has played 773 Test matches, winning 362, losing 205, drawing 204 and tying two.Australia is ranked the number-one team overall in Test cricket in terms of overall wins, win-loss ratio and wins percentage. As at 10 January 2015, Australia is ranked second in the ICC Test Championship on 118 rating points, 6 points behind South Africa.

The team was undefeated in 34 consecutive World Cup matches until 19 March at the 2011 Cricket World Cup where Pakistan beat them by 4 wickets.Australia have also won the ICC Champions Trophy twice – in 2006 and in 2009 – making them the first and the only team to become back to back winners in the Champions Trophy tournaments. The team has also played 39 Twenty20 Internationals,making the final of the 2010 ICC World Twenty20, which they lost to England.

The Indian cricket team is the national cricket team of India. Governed by the Board of Control for Cricket in India (BCCI), it is a full member of the International Cricket Council (ICC) with Test and One Day International (ODI) status.

Although cricket was introduced to India by European merchant sailors in the 18th century, and the first cricket club in India was established in Calcutta in 1792, India's national cricket team did not play its first Test match until 25 June 1932 at Lord's.They became the sixth team to be granted Test cricket status. In its first fifty years of international cricket, India was one of the weaker teams in international cricket, winning only 35 of the 196 Test matches it played during the period.The team, however, gained strength in the 1970s with the emergence of players such as batsmen Sunil Gavaskar and Gundappa Vishwanath, all-rounder Kapil Dev and the Indian spin quartet – Erapalli Prasanna and Srinivas Venkataraghavan (both off spinners), Bhagwat Chandrasekhar (a leg spinner), and Bishen Singh Bedi (a left-arm spinner). Traditionally much stronger at home than abroad, the Indian team has improved its overseas form since the start of the 21st century, winning Test matches in Australia, England and South Africa. It has won the Cricket World Cup twice – in 1983 under the captaincy of Kapil Dev and in 2011 under Mahendra Singh Dhoni's captaincy. After winning the 2011 World Cup, India became only the third team after West Indies and Australia to have won the World Cup more than once,and the first cricket team to win the World Cup at home. It has won the 2007 ICC World Twenty20 and 2013 ICC Champions Trophy, under the captaincy of Dhoni. It was also the joint champions of 2002 ICC Champions Trophy, along with Sri Lanka.

The Indian cricket team is currently ranked seventh in Tests, second in ODIs and second in T20Is by the ICC.Virat Kohli is the current captain of the team in Tests while Dhoni is the ODI and T20I captain. The Indian cricket team has rivalries with other Test-playing nations, most notably with Pakistan, the political arch-rival of India. However in recent times, rivalries with nations like Australia, England and South Africa have also gained prominence