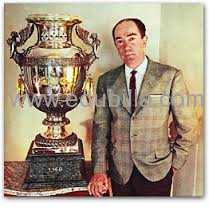 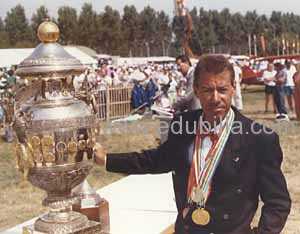 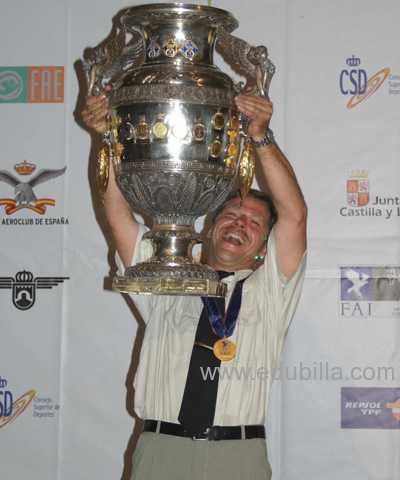 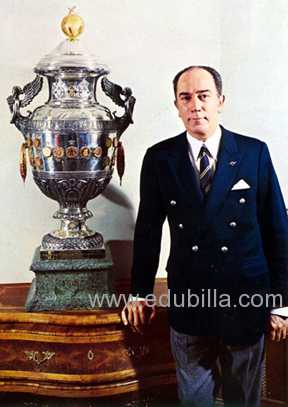 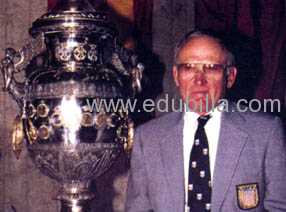 The Aresti Cup, donated by Col. Jose L. Aresti of Spain to the FAI in the 1960's, is presented to the World Aerobatic Champion. The trophy was first presented in 1964 to Tomas Castano of Spain.

Not only the most prestigious award given in competition, the Aresti Cup is also truly a work of art --- created in silver with gold embellishments and featuring gold coins around its diameter symbolizing member nations of the Fédération Aéronautique Internationale. The trophy is topped with a golden globe which featured Col. Aresti's favorite aircraft, the Bücker Jungmeister, but which has now been lost to time. The names of past Champions are engraved around the base of the trophy.

Jose L. Aresti was the creator and author of the “Aresti Aerocryptographic System”, still in use today in all aerobatic competitions.

Aresti was born in Bilbao, Spain in 1919, began flying in the 1930s, and was an aerobatic flight instructor in the Spanish Air Force during World War II. He provided the country’s first aerobatic flight manual and founded several pilot training schools after the war when he also became active on the European airshow circuit flying the Bucker Jungmeister.

Aresti became very active in CIVA’s early years as the Delegate of Spain, which would host the 1964 WAC at Bilbao. His work on an aerobatic catalogue started previous to that and it was in 1964 that the "Aresti Aerocryptographic System" was introduced and approved by CIVA. At the time, some 3,000 maneuvers were catalogued along with difficulty coefficients (called K-factors today). He was instrumental in obtaining government support for aerobatic flying in Spain, which led to very successful aerobatic teams from Spain at the WAC. Colonel Aresti passed away in 2003 at the age of 84 but his legacy remains alive as the Aresti Aerobatic Catalogue continues in use today as the basis of aerobatic competition.

Aresti served as CIVA President in 1968-1969 and was its President of Honour up until his death. He was awarded the FAI Silver and Gold Medals for his work on the catalogue. He brought a professional standard to the cataloguing of aerobatic figures and provided “shorthand” for diagramming aerobatic figures, thereby touching the lives of thousands of aerobatic pilots throughout the world.