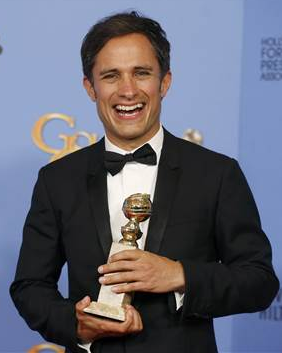 Gael García Bernal is a Mexican film actor, director, and producer. He founded Canana Films in Mexico City. Gael García Bernal was born on November 30, 1978, in Guadalajara, Mexico. Bernal began his acting career as a child, working with his parents in a variety of plays. When he was fourteen, he starred in a soap opera called El abuelo y yo (1992). He appeared in film school exercises and short films, including De tripas, corazón (1996), directed by Antonio Urrutia, which was nominated for an Academy 'Award' for Best Short Film, and El ojo en la nuca (2001), a short film directed by Rodrigo Plá. Bernal studied acting in the Central School of Speech and Drama in London. Amores Perros (2000) was his first major feature film, followed by Y Tu Mamá También (2001), directed by Alfonso Cuarón and photographed by Emmanuel Lubezki. In April 2014, he was announced as a member of the main competition jury at the 2014 Cannes Film Festival. In June 2014, he began production as the star of the dramatic comedy "Zoom," directed by Pedro Morelli. In 2014, he was cast in the lead role of Rodrigo in the Amazon Studios comedy-drama television series Mozart in the Jungle. His performance in the show was met with rave reviews, earning him a Golden Globe Award in 2016.