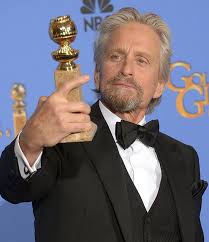 Michael Kirk Douglas (born September 25, 1944) is an American actor and producer, primarily in movies and television. He has won four Golden Globes, including the Cecil B. DeMille Award, two Academy Awards—as producer of 1975's Best Picture, One Flew Over the Cuckoo's Nest and as Best Actor in 1987 for his role as Gordon Gekko in Wall Street and an Emmy Award in 2013 for his portrayal of Liberace in the HBO film Behind the Candelabra. Other performances include The Game, Wonder Boys, Traffic and Falling Down. Douglas received the AFI Life Achievement Award in 2009.[1] He is the eldest of actor Kirk Douglas' four sons.Michael Douglas won Goldern globe award for Best Actor in a Mini-Series or TV Movie in 2014.