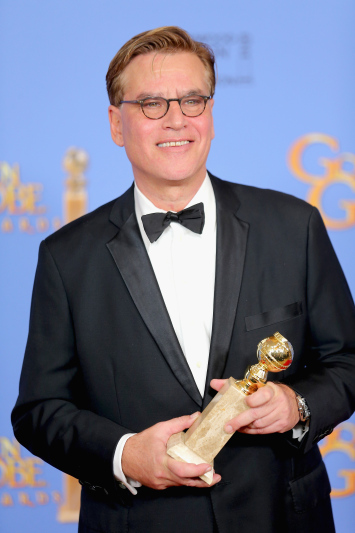 Aaron Benjamin Sorkin is an American screenwriter, producer, and playwright. His works include the Broadway plays A Few Good Men and The Farnsworth Invention; the television series Sports Night, The West Wing, Studio 60 on the Sunset Strip, and The Newsroom; and the films A Few Good Men, The American President, Charlie Wilson's War, The Social Network, Moneyball, and Steve Jobs. He was born on June 9, 1961 in Manhattan, New York City, New York, United States. After graduating from Syracuse University with a Bachelor of Fine Arts in Theater, Sorkin intended to pursue a career in acting. His first play, "Removing All Doubt", was not an immediate success, but his second play, "Hidden in This Picture", debuted in 1988 at the West Bank Cafe Downstairs Theater Bar. A longer version of "Hidden in This Picture", called "Making Movies", opened at the Promenade Theater in 1990. In 1989, he received the prestigious Outer Critics Circle award as Outstanding American Playwright for the stage version of A Few Good Men (1992), which was later nominated for a Golden Globe. In 2016, he received the Golden Globe Award For Best Screenplay in Motion Picture. Sorkin has gone on to write for many movies and TV shows. Besides A Few Good Men (1992), he has written The American President (1995) and Malice (1993), as well as cooperating on Enemy of the State (1998), The Rock (1996) and Excess Baggage (1997).