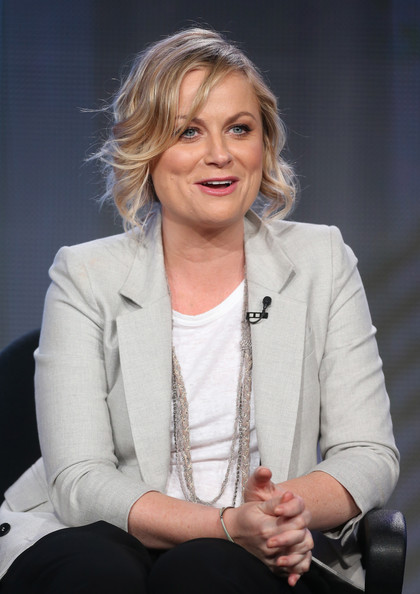 Amy Meredith Poehler (born September 16, 1971) is an American actress, comedian, voice artist, director, producer and writer. She was raised in Burlington, Massachusetts, graduated from Boston College in 1993 and moved to Chicago, Illinois to study improve at The Second City and Improve Olympic. In 1996, she moved to New York City after becoming part of the improvisational comedy troupe Upright Citizens Brigade, which later developed into an eponymous television show that aired on Comedy Central for three seasons. Poehler was also one of the founding members of the Upright Citizens Brigade Theater in 1999. She is a 15-time Emmy Award nominee.

Poehler was a cast member on the NBC television show Saturday Night Live from 2001 to 2008. In 2004, she became the co-anchor of the Weekend Update sketch along with her friend and colleague Tina Fey. Poehler's work on SNL earned her two Primetime Emmy Award nominations for Outstanding Supporting Actress in a Comedy Series. She is known for voicing Bessie Higgenbottom in the 2008–11 Nickelodeon series, The Mighty B! and Eleanor Miller in the Alvin and the Chipmunks CGI films. Since 2009, she has starred as Leslie Knope in the sitcom Parks and Recreation, for which she has received five consecutive nominations for the Primetime Emmy Award for Outstanding Lead Actress in a Comedy Series, and three consecutive Golden Globe nominations for Best Actress in a Television Musical or Comedy Series, with one win in 2014. Poehler is currently serving as an executive producer on the new Swedish-American sitcom Welcome to Sweden, along with her brother Greg Poehler. The series is currently being broadcast on NBC. She is also an executive producer on Broad City which airs on Comedy Central, and had previously appeared in the web series finale.