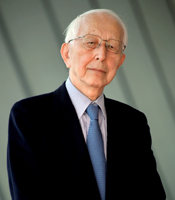 Fumihiko Maki is a Japanese architect who teaches at Keio University SFC. In 1993, he received the Pritzker Prize for his work, which often explores pioneering uses of new materials and fuses the cultures of east and west. He was born on September 6, 1928 in Tokyo, Japan. After graduating from the University of Tokyo in 1952 with a degree in architecture, Maki pursued graduate work in the United States. He studied at Michigan's Cranbrook Academy and at Harvard University, where he received a master's degree from the Graduate School of Design. After completing his formal education in the mid-1950s, Maki worked first as a designer for the large and successful commercial firm of Skidmore, Owings, and Merrill in New York, and then went on to teach at various academic institutions, including Washington University, Harvard University, and the University of Tokyo. Upon his return to Japan he established his own architectural firm, Maki and Associates. In 2011, he received the AIA Gold Medal.