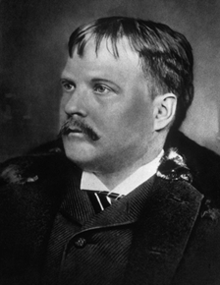 John Wellborn Root was an American architect who was based in Chicago with Daniel Burnham. He was one of the founders of the Chicago School style. One of his buildings was designated a National Historic Landmark; others have been designated Chicago landmarks and listed on the National Register of Historic Places. In 1958, he received the AIA Gold Medal. He was born on January 10, 1850 in Lumpkin, Georgia, United States. He earned an undergraduate degree from New York University in 1869. After graduation, he took a job with the architect James Renwick, Jr. of Renwick and Sands of New York as an unpaid apprentice. Later he took a position with John Butler Snook in New York. While working for Snook, Root was a construction supervisor on the original Grand Central Depot, predecessor to Warren and Wetmore's Grand Central Terminal. Root was greatly influenced by the architecture of Henry Hobson Richardson. He died on January 15, 1891 in Chicago, Illinois, United States.