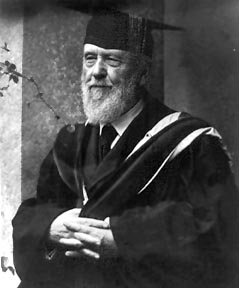 Bernard Ralph Maybeck was an American architect in the Arts and Crafts Movement of the early 20th century. He was an instructor at University of California, Berkeley. Most of his major buildings were in the San Francisco Bay Area. Bernard Ralph Maybeck was born February 7, 1862 in New York City. Educated at the École des Beaux-Arts, Paris (1880–86), Maybeck worked briefly in New York City and Kansas City, Mo., before going to San Francisco. He joined the faculty of the University of California, Berkeley, as a drawing instructor (1894) and served as the university’s first professor of architecture (1898–1903). In 1951, he received the AIA Gold Medal. He also developed a comprehensive town plan for the company town of Brookings, Oregon, a clubhouse at the Bohemian Grove, and many of the buildings on the campus of Principia College in Elsah, Illinois. Bernard Maybeck died in 1957 and is buried in the Mountain View Cemetery in Oakland, California.