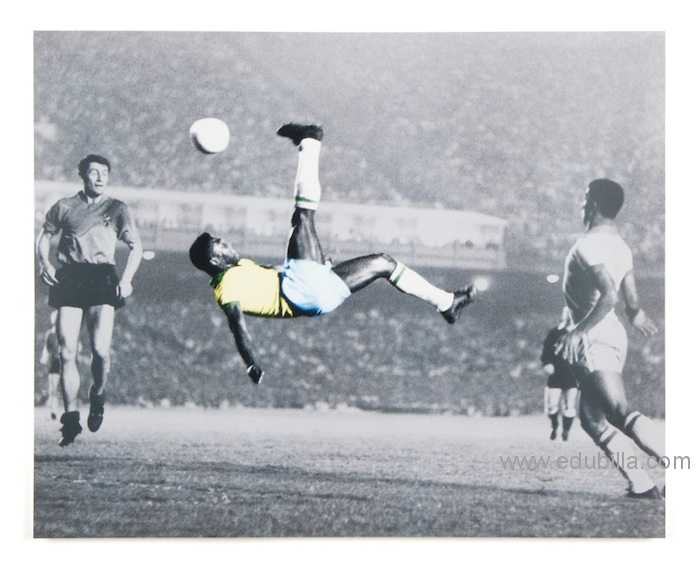 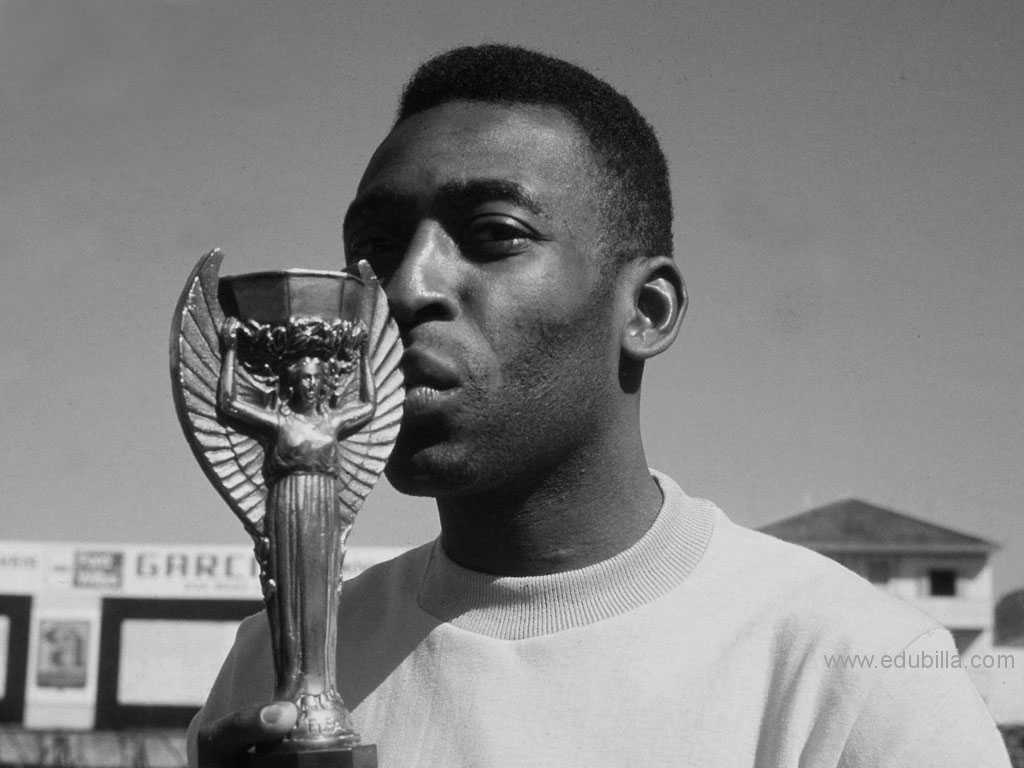 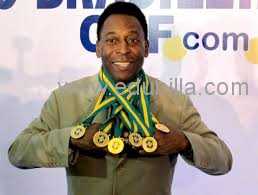 About Edson Arantes do Nascimento

Pele was born under the name Edson Arantes do Nascimento in the village Tres Coracoes, the son of a footballer known as Dondinho, who's career was thwarted by a bad knee. He grew up in poverty in the town of Bauru in the province of Sao Paulo. As a boy Pele helped alleviate the family's financials woes by cleaning shoes at the local train station.He started playing football in the streets, using a stocking stuffed with rags and paper as a ball. In 1954 Pele was picked to play in the newly founded youth team of the club his father had played for, Bauru Athletic Club. Things were handled professionally, Pele received a playing fee and the team was coached by the former Brazilian international Waldemar de Brito, who played for Brazil during the 1934 World Cup.

IIn school Pele performed abysmally, and was held back three times, but on the football field his star was rising. It wasn't long before clubs started to show an interest in the talented young striker. Following the advice of Waldemar de Brito, Pele opted to join Santos CF, a successful football club from the coastal town of the same name. Santos played in the Paulista, the league centred around Sao Paulo. Pele played his first official for Santos at the age of sixteen.That year he immediately made his mark, scoring 36 goals in 29 matches. The next season Pele was even more impressive, scoring 58 goals in 38 matches.

His overwhelming debut as a professional footballer quickly resulted in a place in the Brazilian national team and a spot in the selecao for the 1958 World Cup. A knee injury prevented him form participating in the first two games of the tournament, but in the final match of the group stage, against the Soviet Union, Pelemade his World Cup debut. He failed to score a goal in that game, but in the matches that followed the young forward asserted himself. He scored the only goal in the quarter final match against Wales, a hat-trick in the semi final against France, and two more goals in the final against Sweden. Aged seventeen, he was (and is) the youngest World Cup winner in history.

Pele was quick, strong, a good header and dribbler of the ball, but above all, he possessed a powerful and accurate strike in both legs. The avalanche of goals he produced for Santos, where he teamed up with fellow internationals like Zito and Carlos Alberto, helped the club win a string of trophies. They won the Brazilian national championship, the Taca Brasil, five times in a row, from 1961 to 1965. In 1962 and 1963 the club won the Copa Libertadores, followed both times by victory in the Intercontinental Cup, beating Eusebio's Benfica and Gianni Rivera's AC Milan respectively.

There was little joy for Pele at World Cups in the 1960's. In 1962 he was injured out of the tournament early on, and had to watch as a spectator how his team-mates successfully defended their title, with Garincha playing the starring role in his absence. In 1966 the World Cup ended in a bitter disappointment, as the reigning champions crashed out in the group stage of the tournament. Bitterly disappointed, Peledecided to end his international career. His retirement from the intentional stage would last for two years, but as the 1970 Wold Cup drew nearer, Pele, who scored his thousandth goal as a footballer in 1969 , changed his mind and returned to the selecao.

He would not live to regret his decision. The 1970 Brazilian national team is regarded by many as the best ever national team. Playing a swinging and attack-minded form of samba-football, they captured Brazil's third World Cup. Starring roles were played by the likes of Carlos Alberto, Gerson, Jairzinho, Tostao, Rivelino, and of course Pele. In the final of the tournament Italy were hopelessly outclassed and had to concede four goals, in spite of their defensive approach to the game. The emphatic 1970 World Cup triumph gave Peleto end his international career on a high note. He played his last game for Brazil in the summer of 1971, against Yugoslavia in Rio's Maracana stadium.

In 1974, at the age of 34 years old, Pele decided that the time had come to hang up his boots all together. But his retirement from football would prove to be short lived. A year later Pele, motivated in part by financial problems he found himself in at the time, decided to come out of retirement. He accepted an offer to join New York Cosmos, one of the clubs that formed the famous North American Soccer League.In the NASL Pele earned a salary that could only have dreamed about during his years with Santos. He repaid the league by playing the role of good will ambassador for football in the United States to perfection.

On October 1st, 1977, in front of a 75,000 strong crowd. Pele played his last match, a game between New York Cosmos and Santos, with the great man playing a half for each team. This time his retirement as a player would prove permanent. New York Cosmos had won the NASL that year, so that 'O Rei' could leave the club scene just as he had left the international scene, with his head held high. It was the end of a career that, if friendlies are included, saw him score 1283 goals in 1367 matches.After his retirement Pele has continued playing the role of goodwill ambassador for football. He was also Brazilian minister for Sport for a while.

For his impressive line-up of victories and the extraordinary role in catapulting the status of the sport to newer heights, he received numerous prestigious honors and decorations including Brazil's Gold Medal, Knight Commander of the Order of the British Empire and Lifetime Achievement Award from BBC.

In 2010, he was appointed as the Honorary President of New York Cosmos. In 2012, he was awarded honorary degree from the University of Edinburgh for ‘significant contribution to humanitarian and environmental causes, as well as his sporting achievements’.