Kathryn Tickell The Queen's Medal for Music Awarded In 2008 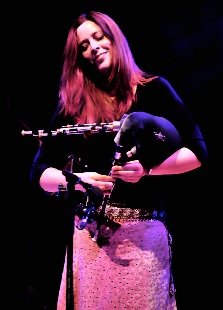 Kathryn Tickell is an English player of the Northumbrian smallpipes and fiddle. She has recorded over a dozen albums, and toured widely. Kathryn was born on 8 June 1967 in Northumberland, England. Her family is from the North Tyne Valley area of Northumberland. Tickell took up the smallpipes aged nine, inspired by her family. Especially her father Mike, who was heavily involved in the local traditional music scene and by the music of an older generation of traditional musicians such as Willie Taylor, Will Atkinson, Joe Hutton, Richard Moscrop, Billy Pigg and Tom Hunter. By the time she turned thirteen in 1980, she had won all the traditional open smallpipes competitions, and was also making a name as an accomplished player of the Shetland fiddle style which she learned from the Shetland fiddle master Tom Anderson at Stirling University's traditional folk summer school.

Her first album, On Kielder Side, was released at the age of sixteen, in 1984. In the same year she was named the official piper for the Lord Mayor of Newcastle upon Tyne. In 2008, Tickell was presented with The Queen's Medal for Music, awarded to those deemed to have made an outstanding contribution to British music. She became Artistic Director of Folkworks, the folk development agency of the north east. The Nash Ensemble invited her to perform with them to celebrate the 75th birthday of Sir Peter Maxwell Davies. Her continued work with Sting led to the release of If on a Winter's Night..., followed by performances in Europe and New York.