Judith Weir The Queen's Medal for Music Awarded In 2007 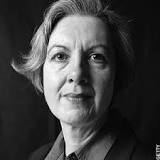 Judith Weir is a British composer and Master of the Queen's Music.   Weir was born into a Scottish family on 11 May 1954 in Cambridge, England. She studied with Sir John Tavener whilst at school and subsequently with Robin Holloway at King's College, Cambridge, graduating in 1976.

Her music often draws on sources from medieval history, as well as the traditional stories and music of her parents' homeland, Scotland. Although she has achieved international recognition for her orchestral and chamber works, Weir is best known for her operas and theatrical works. From 1995 to 2000, she was Artistic Director of the Spitalfields Festival in London. She held the post of Composer in Association for the City of Birmingham Symphony Orchestra from 1995 to 1998. She received the Lincoln Center's Stoeger Prize in 1997, the South Bank Show music award in 2001 and the ISM's Distinguished Musician Award in 2010. In 2007, she was the third recipient of The Queen's Medal for Music. She was Visiting Distinguished Research Professor in Composition in Cardiff University from 2006 to 2009.

In 2005, Weir was appointed CBE for services to music. On 30 June 2014, The Guardian stated that her appointment as the Master of the Queen's Music, succeeding Sir Peter Maxwell Davies, would be announced, this was officially confirmed on 21 July. In May 2015, Weir won The Ivors Classical Music Award at the Ivor Novello Awards. She now lives in London, where she has had a long association with Spitalfields music festival.