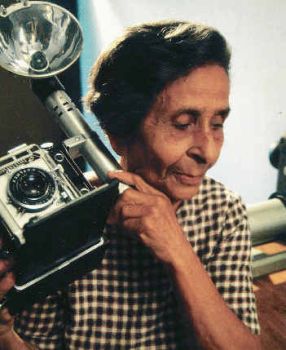 Homai Vyarawalla commonly known by her pseudonym "Dalda 13", was India's first woman photojournalist. She was born on 9 December 1913 in Navsari, Gujarat, India. Her most celebrated photographs include the departure of Lord Mountbatten, India’s last British viceroy; the first raising of independent India’s flag; preparations for Mohandas K. Gandhi’s funeral cremation; Dalai Lama XIV’s arrival into exile in India; visiting dignitaries; and, especially, her many images of Jawaharlal Nehru, India’s first prime minister. Vyarawalla, the daughter of a Parsi theatre actor-director, studied art in Bombay (Mumbai). She began taking photographs at age 13, with the encouragement of Maneckshaw, then her boyfriend. After the couple married, they settled in Delhi (1942), where she joined the British Information Service as a news photographer. Her images appeared in numerous publications, usually under the pseudonym Dalda 13 (an alias reportedly derived from her license plate, DLD 13). Vyarawalla was the subject of the British Arts Council documentary Dalda 13 (1996) and of the book India in Focus: Camera Chronicles of Homai Vyarawalla (2006). She was awarded the National Photo Award for Lifetime Achievement in 2010 and the Padma Vibhushan in 2011.