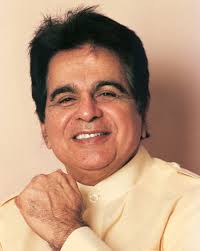 Dilip Kumar (born Muhammad Yusuf Khan on 11 December 1922) is an Indian film actor also known as Tragedy King, and described as "the ultimate method actor" by Satyajit Ray.He debuted as an actor in the film Jwar Bhata in 1944 produced by Bombay Talkies. His career has spanned over six decades and with over 60 films. He starred in films of a variety of genres such as the romantic Andaz (1949), the swashbuckling Aan (1952), the dramatic Devdas (1955), the comical Azaad (1955), the historical Mughal-e-Azam (1960) and the social Ganga Jamuna (1961).

In 1976, Dilip Kumar took a five-year break from film performances and returned with a character role in the film Kranti (1981) and continued his career playing leading roles in films such as Shakti (1982), Karma (1986) and Saudagar (1991). His last film was Qila (1998). Dilip Kumar has acted with actress Vyjayanthimala the most, where they both had acted seven films together including the former's home production Gunga Jamuna resulting in great on-screen chemistry and an alleged affair between them.

The Government of India honoured him with the Padma Bhushan award in 1991, the Dadasaheb Phalke Award in 1994 and the Padma Vibhushan in 2015 for his contributions towards Indian cinema and nominated him to Rajya Sabha, the upper house of Indian parliament for a term. He is the first recipient of Filmfare Best Actor Award (1954) and still holds the record for the most number of Filmfare awards won for that category with eight wins.