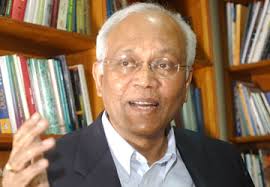 Raghunath Anant Mashelkar (Marathi: FREng born 1 January 1943 in Mashel, Goa) is also known as Ramesh Mashelkar. He is the former Director General of the Council of Scientific & Industrial Research (CSIR), a chain of 38 publicly funded industrial research and development institutions in India.

Mashelkar is presently the President of Global Research Alliance, a network of publicly funded research and development institutes from Asia-Pacific, South Africa, Europe and USA with over 60,000 scientists. He is also the Chairperson of India's National Innovation Foundation.[6] He is also appointed as the first Chairperson of Academy of Scientific and Innovative Research (AcSIR).

Mashelkar is the former President of the Indian National Science Academy and the UK Institution of Chemical Engineers (2007–08).[4] He served for over eleven years as the director general of the Council of Scientific and Industrial Research,world's largest chain of publicly funded industrial R&D institutions, with thirty-eight laboratories and about 20,000 employees. He is the third Indian engineer to have been elected as fellow of Royal Society (FRS), London in the twentieth century. He was elected foreign associate of the United States National Academy of Sciences in 2005, only the 8th Indian since 1863 to be selected. On 28 April 2008, he was elected as the foreign associate of Australian Academy of Technological Sciences and Engineering.[9] He is the first Indian to have received this honour. He was elected foreign fellow of US National Academy of Engineering (2003), International Fellow[1] of Royal Academy of Engineering, UK (1996), and Fellow of World Academy of Art & Science, USA (2000). Twenty-six universities have honoured him with honorary doctorates, which include University of London, University of Salford, University of Pretoria, University of Wisconsin–Milwaukee and Delhi University.