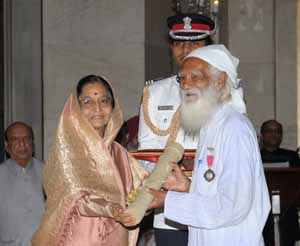 Sunderlal Bahuguna is a noted Garhwali environmentalist, Chipko movement leader and a follower of Mahatma Gandhi's philosophy of Non-violence and Satyagraha. He was born on 9 January 1927 in Maroda village, Tehri Garhwal, Uttarakhand. When he was 13 he met Dev Suman, a freedom fighter from Garhwal, and was attracted to the nationalist cause especially using Gandhian methods of civil disobedience. In the 1970s a movement that originated in the Himalayas became a rallying point for environmentalists in India and beyond, and today is seen as a seminal event in the country's modern environment movement. This was the Chipko movement. There was a growing peaceful agitation against felling of trees in the Garhwal Himalayas in the beginning of that decade. A flashpoint was reached on March 26, 1974 when a group of village women in Chamoli district resorted to hugging trees to prevent them from being felled. The protest soon spread far and wide.

In the early 1980s Bahuguna made the movement even more popular by undertaking a 5,000-kilometre march through the Himalayas. He visited hundreds of villages in the region to spread awareness and gather support for the cause. He also met the then prime minister Indira Gandhi, a meeting that is said to have paved the way for a ban on felling of green trees for 15 years in the region. He was awarded the Padma Vibhushan, India's second highest civilian honour, on 26 January 2009.