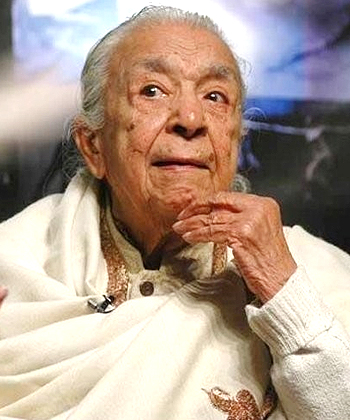 Zohra Sehgal was an Indian actress, dancer, and choreographer. She was born on 27 April 1912 in Saharanpur, British India. Sehgal was best known to Western audiences for her roles in British televisionÃ¢??s The Jewel in the Crown (1984) and Tandoori Nights and the films Bhaji on the Beach (1993) and Bend It like Beckham (2002). She began studying dance in Germany in the early 1930s before touring Europe and the U.S. with Uday Shankar's dance troupe. In 1945 Sehgal, a Muslim, and her Hindu husband moved to Bombay (Mumbai), where she joined the theatre group Indian People's Theatre Association (IPTA). She spent 14 years with the IPTA and the Prithvi Theatre while also taking small roles in Hindi-language movies, such as Neecha nagar (1946; Lowly City), which won the Grand Prix du Festival International du Film at the Cannes film festival. Sehgal traveled to London in 1962 on a drama scholarship and remained in the U.K. until the 1990s, when she returned to India and continued acting until the age of 95. She was awarded the Padma Shri in 1998, Kalidas Samman in 2001, and in 2004, the Sangeet Natak Akademi. India's National Academy for Music, Dance and Drama presented her with its highest award, the Sangeet Natak Akademi Fellowship for lifetime achievement. She received the Padma Vibhushan, India's second-highest civilian honor, in 2010. She died in a New Delhi hospital on 10 July 2014 due to cardiac arrest.Ã?Â