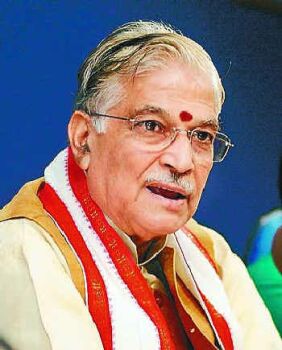 Murli Manohar Joshi is an Indian politician belonging to Bharatiya Janata Party. He has served as the president of the party during the period – 1991-1993. His views on Indian socio-politics and his affiliation with the RSS make him a social leader of the party. He is deeply influenced by the life of great Indian leaders like Veer Savarkar, Shri Guruji and Deendayal Upadhyaya. He has also served as the home minister for 13 days in 1996. He was awarded Padma Bhushan by the President of India in the year 2017 for her services in the field of Public Affairs.

Joshi was born on 5 January 1934, hailing from the Kumaon Hills region of Nainital northern India which today form a part of the state of Uttarakhand. Joshi had his early education in Chandpur, District Bijnore and Almora (currently part of Uttarakhand). He completed his B.Sc. from Meerut College and M.Sc. from Allahabad University. Here one of his teachers was Professor Rajendra Singh, who later became the RSS Sarsanghchalak. He did his doctorate from Allahabad University. The subject of his doctoral thesis was spectroscopy. He published a research paper in Physics in Hindi, which was a first of its kind.After completing his PhD, Joshi started teaching Physics at Allahabad University.