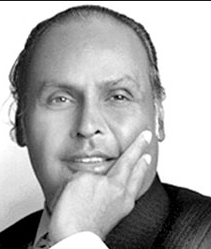 Dhirubhai  Ambani was an Indian business tycoon who founded Reliance Industries in Bombay with his cousin. He had been figured in the The Sunday Times top 50 businessmen in Asia.  Ambani took Reliance Industries public in 1977 and by 2007, the combined fortune of the family was $60 billion, making the Ambanis the third richest family in the world. Ambani died on 6 July 2002. In 2016, He was honored posthumously with the Padma Vibhushan, India's second highest civilian honor for his contributions towards the field of Trade and Industry. He was born on 28 December 1932 in Chorvad, Junagadh State. After doing his matriculation at the age of 16, Dhirubhai moved to Aden, Yemen. He worked there as a gas-station attendant, and as a clerk in an oil company. He returned to India in 1958 with Rs 50,000 and set up a textile trading company. Assisted by his two sons, Mukesh and Anil, Dhiru Bhai Ambani built India's largest private sector company, Reliance India Limited, from a scratch. Over time his business has diversified into a core specialisation in petrochemicals with additional interests in telecommunications, information technology, energy, power, retail, textiles, infrastructure services, capital markets, and logistics.

Dhirubhai Ambani is credited with shaping India's equity culture, attracting millions of retail investors in a market till then dominated by financial institutions. Dhirubhai revolutionised capital markets. From nothing, he generated billions of rupees in wealth for those who put their trust in his companies. His efforts helped create an 'equity cult' in the Indian capital market. With innovative instruments like the convertible debenture, Reliance quickly became a favorite of the stock market in the 1980s. In 1992, Reliance became the first Indian company to raise money in global markets, its high credit-taking in international markets limited only by India's sovereign rating. Reliance also became the first Indian company to feature in Forbes 500 list.