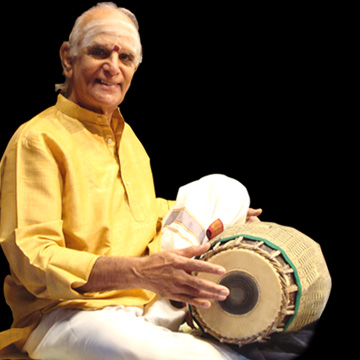 Umayalpuram Kasiviswanatha Sivaraman is an Indian mridangam player. He was awarded the Padma Vibhushan, India's second highest civilian honor, on the occasion of the country's 61st Republic Day observance on 26 January 2010 and received an honorary doctorate from the University of Kerala in 2010. He was born on 17 December 1935 in Umayalpuram, Tanjore, Madras Presidency, British India. His father was an avid practicioner of music, adept in playing the violin and mridangam. At an early age, his father got Sri Sivaraman initiated in mridangam through the gurukula system with eminent mridangam masters. Umayalpuram Sivaraman completed his schooling at the Municipal Primary school and Town high school in Kumbakonam and the Kalyanasundaram High School in Thanjavur. After schooling, he obtaining the B.A degree from the Kumbakonam Government College, and completed his graduation in law from the Madras Law College in 1958. Then Sri Sivaraman enrolled for the M.L. course at the Madras University and completed one year.

His first musical performance was at the tender age of 10, in 1945 when he accompanied Srinivasa Iyer of Kumbakonam at the Sri Kalahasteeswaraswami Temple in Kumbakonam. In a rich career that spans 60 years, Umayalpuram Sivaraman has accompanied maestros like Ariyakudi Ramanuja Iyengar, Musiri Subramaniya Iyer, Mysore Chowdiah and G.N. Balasubramaniam right up to living legends Semmangudi Srinivasa Srinivasa Iyer, Dr. M. Balamuralikrishna and Madurai N. Krishnan besides collaborating with north Indian counterparts Pt. Ravishankar, Hariprasad Chaurasia and Zakhir Hussain among several others. Stepping outside the world of Indian classical music, he has recorded for ECM with violinist L. Shankar in a contemporary new age jazz direction, heavily inspired by Indian music. He is currently the Director of the 'Thanjavur Vaidhyanatha Iyer School for Percussion' of The Music Academy and runs his own institution, 'Laya Lavanya' in Mylapore, Madras. Sri Umayalpuram Sivaraman has received numerous honors and awards along his illustrious career. He was conferred the award 'Padmashri' by the Government of India in 1988. He received Sangeet Natak Akademi award in 1992, and was conferred Kalaimamani, awarded by the Iyal Isai Nataka Mandram of Tamilnadu. He had been designated as the "State Artiste"of the Government of Tamil Nadu from 1981-1987. He was also appointed as the 'Asthana Vidwan' of the Sri Kanchi Kamakoti Mutt by His Holiness Sri Sankaracharya Swami. He received Swathi Sangeetha Puraskaram, the highest avward for contribution to music by the Government of Kerala in 2005.