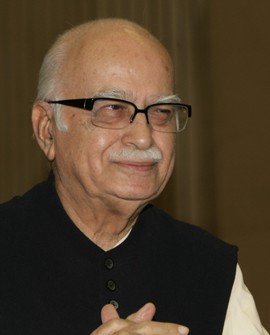 Lal Krishna Advani (born 8 November 1927) is an Indian politician who is a senior leader of the Bharatiya Janata Party (BJP). When the BJP-led National Democratic Alliance was in power from 1998 to 2004 under Prime Minister Atal Bihari Vajpayee, Advani served as Minister of Home Affairs; he additionally served as Deputy Prime Minister of India from 2002 to 2004. He was the Leader of the Opposition in the 10th Lok Sabha and 14th Lok Sabha (lower house of Parliament).Advani began his political career as a volunteer of Rashtriya Swayamsevak Sangh, a right-wing Hindu nationalist organisation.In 2015 The Government of India awarded The Padma Vibhushan the second highest civilian award in Republic of India in Public Affair category.