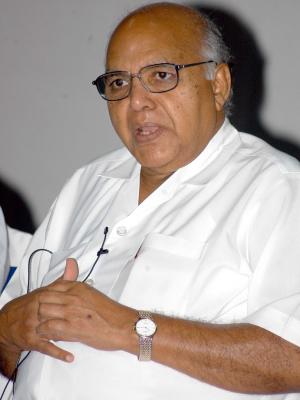 Cherukuri Ramoji Rao, better known as Ramoji Rao is an Indian businessman, film producer, educationist, journalist and media entrepreneur. He is head of the Ramoji Group which owns, among other things, the world's largest film production facility, Ramoji Film City and film production company Ushakiran Movies, established in 1983. He received the Padma Vibhushan, India's second highest civilian honor for his contributions towards the field of Journalism, Literature and Education in 2016. He was born on November 16, 1936 in Pedaparupudi, Andhra Pradesh, India. Some of the companies owned by the Ramoji group include Margadarsi Chit Fund, Eenadu newspaper, ETV, Priya Foods, Ushakiron Movies and as mentioned above, the Ramoji Film City near Hyderabad. He is also the chairman of Dolphin group of hotels in AndhraPradesh. Bold text He got into trouble with law for collecting money for Chit funds and never reporting to government to avoid paying taxes. Ramoji Film City, the largest film production facility in the world is popular among film makers as well as tourists - nearly 100,000 tourists visit this facility every month. Its many attractions include exotic gardens, an entertainment centre where live stunt shows are enacted, and a ride that simulates space travel.