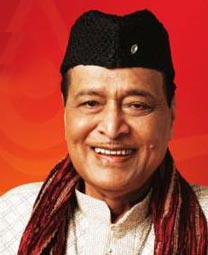 Bhupen Hazarika was an Indian lyricist, musician, singer, poet and film-maker from Assam. He was born on 8 September 1926 in Sadiya, Assam, British India. A child prodigy, he sang his first song in the second Assamese film, Agarwala's Indramalati, in 1939 when he was 12 years old. He completed his Intermediate Arts from Cotton College in 1942, and went on to Banaras Hindu University to complete his B.A. in 1944 and his M.A. in Political Science in 1946. He earned a Ph.D. from Columbia University in New York in 1952, submitting a dissertation titled "Proposals for Preparing India's Basic Education to Use Audio-Visual Techniques in Adult Education". Few know that, during his time at Columbia University, Hazarika was a friend of Paul Robeson, the great black American singer, actor and civil rights activist. Robeson's passionate crusade for social justice and black pride has permeated Bhupenda's own worldview. Inspired greatly by Robeson's powerful rendition of the song "Ole Man River", Hazarika created his own moving ode to the Brahmaputra. He was a child prodigy who was discovered by his mentors at a young age which helped him to excel at his abilities. He has rendered music, written lyrics, and sung for numerous Assamese, Bengali and Hindi films which created an everlasting impression on both Assamese and Indian cinema, literature, and music. Most of his songs are marked by themes of humanity and universal brotherhood and have been translated to, and sung in many languages, most notably in Bengali and Hindi.

Other than being a musician and playback singer, he was an immensely talented filmmaker who created some of the most memorable national award winning Assamese films. He is also acknowledged to have introduced the culture and folk music of Assam and Northeast India to Hindi cinema at the national level. Winner of several prestigious awards, he was truly one of the most celebrated artists of the 20th century. He received the National Film Award for Best Music Direction in 1975. Recipient of Sangeet Natak Akademi Award (1987), Padmashri (1997), and Padmabhushan (2001), Hazarika was awarded with Dada Saheb Phalke Award (1992), India's highest award in cinema, by the Government of India and Sangeet Natak Akademi Fellowship (2008), the highest award of the Sangeet Natak Akademi, India's The National Academy for Music, Dance and Drama. He was posthumously awarded the Padma Vibhushan, India's second-highest civilian award, in 2012. Hazarika also held the position of the Chairman of the Sangeet Natak Akademi from December 1998 to December 2003. He died on 5 November 2011 in Mumbai, Maharashtra, India.