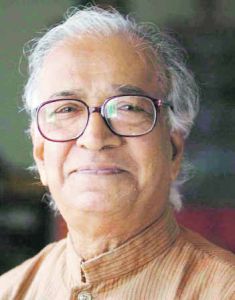 K. G. Subramanyan is one of the pioneers of Indian modern art. He was awarded the Padma Vibhushan in 2012. He was born in 1924 at Kerala, India. While studying economics at Presidency College, Madras, Subramanyan became involved in the freedom struggle. He was imprisoned and debarred from government colleges. The turning point of his life came when he joined Kala Bhavan at Visva Bharati in Santiniketan in 1944. He studied at kala Bhavan till 1948. Between 1951 and 1959, Subramanyan was a lecturer in painting at the Faculty of Fine Arts in Baroda. During 1955 and 1956, he wen to the Slade School of Art in London to study as a British Council research scholar. From 1959 to 1961, Subramanyan was deputy director (design) at All India Handloom Board. Bombay. He continued to be a design consultant till 1966. He went back to Baroda as reader in painting between 1961 and 1965.

From 1966 to 1980, Subramanyan was professor of painting at Baroda. He went to New York as J D Rockefeller 111 fellow during 1966 and 1967. From 1968 to 1974, he acted as the dean of the faculty of fine arts, Baroda. In 1975 and 1976, he attended World Craft council meets as a delegate. In 1976, he was a visiting lecturer at various Canadian universities. In 1980 Subramanyan moved back to Santiniketan and till 1989 was professor of painting at Kala Bhavan. During 1987 and 1988 ' he lived at Oxford as Christensen Fellow in St. Catherine's College. In 1989, he was appointed professor emeritus at Kala Bhavan, Visva Bharati. As an artist he is known as one of the most versatile practitioners, having done works, apart from painting, in the traditions of mural, various craft traditions of India, toy-making, pottery, illustration & design, terracotta sculpture. His paintings are noted for their inherent wit, ironies, satire and critical social commentaries.