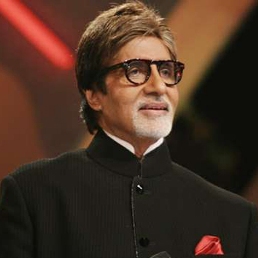 Amitabh Harivansh Bachchan (born 11 October 1942) is an Indian film actor. He first gained popularity in the early 1970s for movies like Deewar and Zanjeer, and was dubbed India's first "angry young man" for his on-screen roles in Bollywood, and has since appeared in over 180 Indian films in a career spanning more than four decades.Bachchan is widely regarded as one of the greatest and most influential actors in the history of Indian cinema. Given the success of his gifted film actor son Abhishek Bachchan, Amitabh Bachchan has been dubbed "Big B" to distinguish between the two.So total was his dominance of the movie scene in the 1970s and 1980s that the French director François Truffaut called him a "one-man industry."

Bachchan has won many major awards in his career, including three National Film Awards as Best Actor (a record he shares with Kamal Hassan and Mammootty), a number of awards at international film festivals and award ceremonies and fourteen Filmfare Awards. He is the most-nominated performer in any major acting category at Filmfare, with 39 nominations overall. In addition to acting, Bachchan has worked as a playback singer, film producer and television presenter. He also had a stint in politics in the 1980s. The Government of India honored him with the Padma Shri in 1984, the Padma Bhushan in 2001 and the Padma Vibhushan in 2015 for his contributions to the arts.