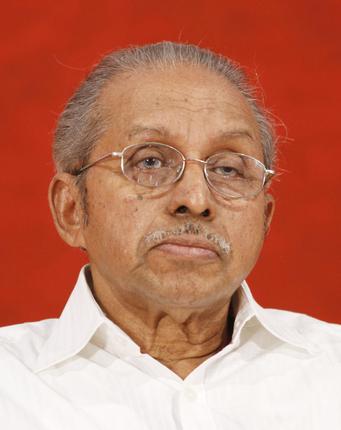 Ottaplakkal Neelakandan Velu Kurup popularly known as O. N. V. Kurup or simply and endearingly O. N. V., was a renowned Malayalam poet and lyricist from Kerala, India, who won the Jnanpith Award, the highest literary award in India for the year 2007. He received the awards Padma Shri in 1998 and Padma Vibhushan in 2011, the fourth and second highest civilian honours from the Government of India. In 2007 he was awarded an Honorary Doctorate by University of Kerala, Trivandrum. O. N. V. is known for his leftist leaning. He was the Left Democratic Front (LDF) candidate in the Thiruvananthapuram constituency for the Lok Sabha elections in 1989. He was born on 27 May 1931 in Chavara, Kollam. He lost his father when he was eight. He did his schooling at Government School, Chavara. From Sree NarayanaGuru College Kollam, he graduated with Economics degree. Then he went to Travancore University, now Kerala University Thiruvananthapuram and did Master's degree in Malayalam. He was a professor in many colleges and retired in the year 1986.