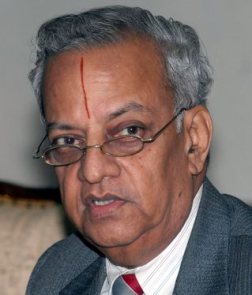 N. Gopalaswami is a former Chief Election Commissioner of India who has been awarded the Padma Bhushan in 2015. He is a 1966 batch Indian Administrative Services officer belonging to Gujarat cadre. He took over the charge of CEC on 30 June 2006 and has retired in April 2009.He is currently the president of Vivekananda Educational Society which runs a group of schools in and around Chennai.