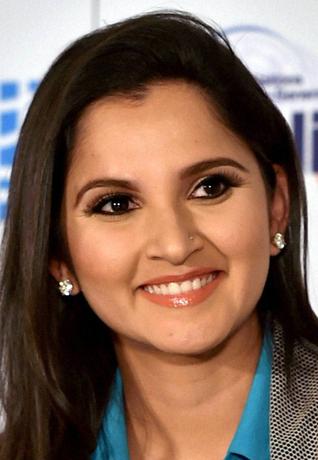 Sania Mirza born November 15, 1986, is an Indian tennis player. She began her tennis career in 2003. In 2004 she was given the Arjuna award by the Indian Government. She is known for her powerful forehand ground strokes. She was born on 15 November 1986 in Bombay, India. She attended Nasr School in Hyderabad and later graduated from St. Mary's College. She has received an honorary degree of Doctor of Letters from the MGR Educational and Research Institute University in Chennai on 11 December 2008. She is also a very good swimmer. Sania started playing tennis at the age of six. She started practicing under CK Bhupati, Mahesh Bhupati's father and first started playing tennis at the Nizam club in Hyderabad. She learnt the professional game at Sinnet Tennis Academy in Secunderabad before finally moving to Ace Tennis Academy in the USA. In 2015, she created history by becoming the first Indian woman to achieve the world number one ranking in the doubles segment of WTA. In the same year, she won the Wuhan Open women's doubles trophy, along with her Swiss partner Martina Hingis. This was the seventh title they have won together. In 2016, She received the Padma Bhushan Award.