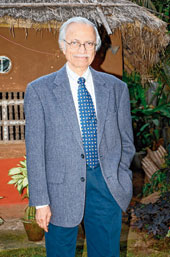 Jogesh C. Pati is an Indian American theoretical physicist at the SLAC National Accelerator Laboratory. He was born 1937 in Baripada, Odisha, India. Pati earned B.Sc. from Ravenshaw College, Utkal University in 1955; M.Sc. from Delhi University in 1957; and Ph.D. from University of Maryland, College Park in 1961. Pati has made pioneering contributions to the notion of a unification of elementary particles – quarks and leptons – and of their gauge forces force: weak, electromagnetic, and strong. His formulation, carried out in collaboration with Nobel Laureate Abdus Salam of Pakistan, of the original gauge theory of quark–lepton unification, and their resulting insight that violations of baryon and lepton numbers, especially those that would manifest in proton decay, are likely consequences of such a unification, provide cornerstones of modern particle physics today. The suggestions of Pati and Salam of the symmetry of SU(4)–color, left-right symmetry, and of the associated existence of right-handed neutrinos, now provide some of the crucial ingredients for understanding the observed masses of the neutrinos and their oscillations. Pati was awarded the Dirac Medal for his seminal contributions to a "Quest for Unification" in the year 2000 along with Howard Georgi and Helen Quinn. In 2013, Pati was conferred the honor of Padma Bhushan, the 3rd highest civilian award from the Govt. of India.