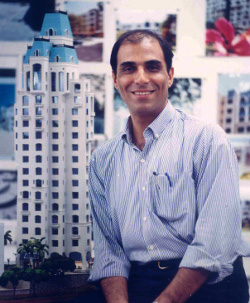 Hafeez Contractor is an Indian architect. He was member of the Bombay Heritage Committee and New Delhi Lutyens Bungalow Zone Review Committee. He was awarded Padma Bhushan in January 2016 by the Governement of India. He was born in 1950 in Mumbai, Maharashtra, India. He earned his graduate diploma in architecture from the University of Mumbai in 1975 and completed his graduation and MS in Architecture from Columbia University, New York City on a Tata scholarship. He studied at the Academy of Architecture in Mumbai and then went on to pursue a post graduation degree from Columbia University in New York. After completing his architectural studies from the Academy of Architecture in Mumbai and New York's Columbia University, he started his career in 1968 as an apprentice with his uncle Architect T. Khareghat. In 1977, he became an associate partner in his uncle's firm. In 1982, he began his own practice, with dedication to design excellence, efficient delivery and sophistication in building technology as his hallmarks. Hafeez along with officials of the urban development department and senior authorities has worked out solutions for slums plaguing Mumbai, by introducing a slum rehabilitation scheme. His special emphasis is also on social housing and his dream is to provide a house to every Indian. He is currently empanelled and working with various housing boards of different states including Maharashtra, Rajasthan, Bihar, Chhattisgarh, Karnataka, Uttar Pradesh, Madhya Pradesh, and few others.