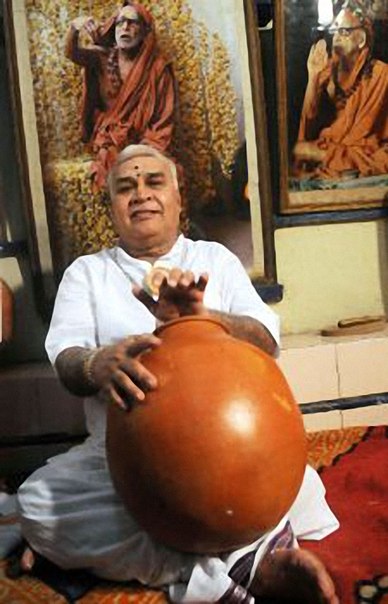 Thetakudi Harihara Vinayakram also known as Vikku Vinayakram is a Grammy Award–winning Indian percussionist. He plays Carnatic music with the ghatam, an earthen pot, and is credited with popularizing the ghatam. He was born on August 11, 1942 in Chennai. He was awarded the Padma Shri, given by Government of India in 2002, and later the 2012 Sangeet Natak Akademi Fellowship, the highest honour in the performing arts conferred by the Sangeet Natak Akademi, India's National Academy for Music, Dance and Drama. Finally he was awarded the Padma Bhushan in 2014. Currently, Vinayakram has two albums of his on the market. One, entitled "Thala Vadya Katchery", is a masterful gathering of violin, konnakol, mridangam, khanjira, ghatam, morsingh, and dholak. The album is conducted by Vinayakram and assisted by T.H. Subash Chandran.

Another album, entitled "Swara Laya Mela," presented by Vinayakram and coordinated by Subash Chandran, is a rendering by the Sri Sri Maha Periyava Group. This group contains a number of young and experienced instrumentalists, and the album contains compositions which are swara representations of jathis, which have been set to tune in various ragas to result in sublime music. Other albums of Vinayakram include "Together", a gathering of Vinayakram along with both of his sons, and "Moon Over the Isles", an assembly of various percussionists from Vinayakram's school. Another album of Vinayakram which is expected to arrive on the market soon is entitled "Generations" and involves Vinayakram, Subash Chandran, Selvaganesh, and Umashankar; one especially unique song on that album is a piece involving three ghatams set at different pitches, played by Vinayakram, Subash Chandran, and Umashankar. Vinaykram has also published two books: 'Art of Mridangam' in English and 'Mridanga Pada Bhodhini' in Tamil.