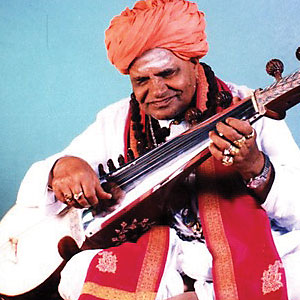 Puttaraj Gawai was an Indian musician in the Hindustani classical tradition, a scholar who authored more than 80 books in Kannada, Sanskrit and Hindi, a music teacher and a social servant. A member of the Gwalior Gharana (school), he is renowned for his ability to play many instruments such as the veena, the tabla, mridangam, violin etc., as well as for his popular renditions of devotional music (bhajans) vachanas. A famous vocalist both in Hindustani and Karnataka Music. He is the recipient of the Padma Bhushan, India's third highest civilian honour, awarded in 2008. He was born on 3 March 1914 in Karnataka, India. He was taken to Veereshwara Punyashrama by Ganayogi Panchakshara Gawai. Under his guidance he mastered Carnatic music and Hindustani music. He is known for his renditions of Vachanas. He set up a theater company to promote theater culture. His first play was Sri Sivayogi Sidharama.

His music school was dedicated to teach music to the disabled people of all castes and sections of the society. Shree Veereshwara Punyashrama is the charitable institution run by him to uplift the blind, orphans and poor children. He has taught more than 1000 visually impaired students. Sangeet Shastra Jnana, Tabla Shikshaka, GuruSudha, Taala Paachakshara are his books on music. Some of the books that he has written include Akkamahadevi Purana, Haveri Shivabasava Purana, Purathanara Purana, Kalikeri Guru Mahima Purana, Sharana Basaveshwara Purana, Sri Veerabhadreshwara Puraana, Sri Chikkeshwara Puraana, etc. His books in Sanskrit include Shrimat Kumara Geetha, Shri Linga Sooktha, Tatparya Sahit Sri Rudra, Panchakshara Suprabhata and Kumareshwara Kavya. He died on 27th September 2010 at Gadag in Karnataka.