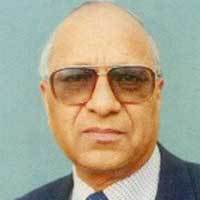 Dr. Subhash C. Kashyap ( born 10 May 1929) is a former Secretary-General of 7th Lok Sabha, 8th Lok Sabha and 9th Lok Sabha and Lok Sabha Secretariat (Lower House of Parliament of India) from 1984 to 1990. He is well known Political Scientist, expert in Indian Constitution, Constitutional Law, Parliamentary Experts and distinguished scholar. He also headed an International Centre for Parliamentary Documentation,IPU at Geneva till 1983. He was Honorary Constitutional Advisor to the Government of India on Panchayati Raj Laws and Institutions. He is also Recipient of several prestigious awards for the Best Books in Constitution, Law and Political Science. At present Dr. Kashyap is an Honorary Research Professor at the Centre for Policy Research (CPR), New Delhi. He was also a Member of the National Commission to Review the Working of Constitution and Chairman of its Drafting and Editorial Committee.The Government of india honoured him with the Padma Bhushan award in 2015.