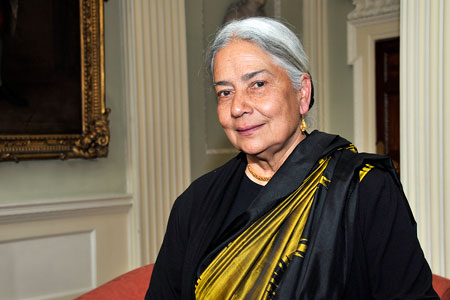 Anita Mazumdar Desai (born 24 June 1937) is an Indian novelist and the Emerita John E. Burchard Professor of Humanities at the Massachusetts Institute of Technology. As a writer she has been shortlisted for the Booker Prize three times; she received a Sahitya Academy Award in 1978 for her novel Fire on the Mountain, from the Sahitya Academy, India's National Academy of Letters; she won the British Guardian Prize for The Village by the Sea.

Anita Mazumdar was born in Mussoorie, India, to a German mother, Toni Nime, and a Bengali businessman, D. N. Mazumdar. She grew up speaking German at home and Bengali, Urdu, Hindi and English outside the house. However, she did not visit Germany until later in life as an adult. She first learned to read and write in English at school and as a result English became her "literary language". She began to write in English at the age of seven and published her first story at the age of nine.

She was a student at Queen Mary's Higher Secondary School in Delhi and received her B.A. in English literature in 1957 from the Miranda House of the University of Delhi. The following year she married Ashvin Desai, the director of a computer software company and author of the book Between Eternities: Ideas on Life and The Cosmos. They have four children, including Booker Prize-winning novelist Kiran Desai. Her children were taken to Thul (near Alibagh) for weekends, where Desai set her novel The Village by the Sea. For that work she won the 1983 Guardian Children's Fiction Prize, a once-in-a-lifetime book award judged by a panel of British children's writers.

Desai published her first novel, Cry The Peacock, in 1963. She considers Clear Light of Day (1980) her most autobiographical work as it is set during her coming of age and also in the same neighbourhood in which she grew up. In 1984 she published In Custody – about an Urdu poet in his declining days – which was shortlisted for the Booker Prize. In 1993 she became a creative writing teacher at Massachusetts Institute of Technology. Her novel, The Zigzag Way, set in 20th-century Mexico, appeared in 2004 and her latest collection of short stories, The Artist of Disappearance was published in 2011.

Desai has taught at Mount Holyoke College, Baruch College and Smith College. She is a Fellow of the Royal Society of Literature, the American Academy of Arts and Letters, and of Girton College, Cambridge (to which she dedicated Baumgartner's Bombay). In addition, she writes for the New York Review of Books.