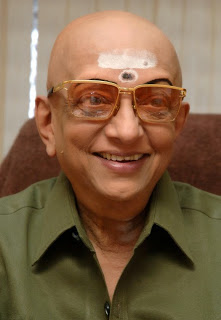 Cho Ramaswamy is a comedian, editor, playwright and lawyer in Tamil Nadu. His full name is Srinivasa Iyer Ramaswamy. His famous Tamil magazine is Thuglak. He is a witty figure in the Tamil Nadu and Indian politics. He was nominated to Rajya Sabha by K. R. Narayanan, the President of India at that time. President nominates 12 M.P.s who excel in the fields of art, social service or literature and he was one of them. He served as the member of the Rajya Sabha from November 1999 to November 2005.

Cho Ramaswamy was born on 5th October 1934 in Chennai. His father is R. Srinivasa Iyer and his mother is Rajammal. He broke away from G. K. Moopanar and joined M. Karunanidhi in the year 1996, but this relationship did not last long. The main reason for this is due to the release of ransom to sandalwood smuggler Veerappan to free Kannada actor Rajkumar. He is also a consumer activist helping the consumers to get their rights.

He was the founder and editor of the Tamil magazine, Thuglak. His popularity in the Tamil Nadu literary circles was mainly due to his impartial assessment of political issues, and the audacity and fearlessness with which he published his viewpoints. Politicians such as J. B. Kripalani, Indira Gandhi, Karunanidhi, Chandra Shekhar, G. K. Moopanar, M. G. Ramachandran, Jayalalithaa, Ramakrishna Hegde, N. T. Rama Rao, Atal Bihari Vajpayee, and L. K. Advani, Sonia Gandhi, Manmohan Singh, P. Chidambaram were some of the targets of his editorial attacks. He was widely considered to be an unbiased political analyst who would criticize the negatives of both the left wing and right wing political parties. In his last years, he predicted that Narendra Modi would do diligent work towards the development of India and also praised Jayalalithaafor her work in Tamil Nadu. The anniversary celebration of his popular magazine ?Thuglak? is being organised on 15 January every year coinciding with the local festival of ?Pongal? and is attended by thousands of his admirers as well as adversaries. Several VIPs also participate in the function. The main attraction during the celebrations is the questions posed by members of the audience and quick answers given by Cho. On 25th January 2017, Government of India announced "Padma Bhushan" award for his contribution towards Literature & Education – Journalism.