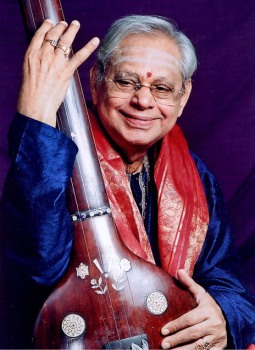 Mahamahopadhyaya Dr. Nookala Chinna Satyanarayana was a Carnatic musician, a classical vocalist, musicologist, author and teacher, a great administrator and motivator. He was a performer on All India Radio and Doordarshan who participated in Sangeeta Sammelans, outdoor broadcasts and national programmes innumerable times. His radio lessons and Bhakti Ranjanis were very popular. He was awarded Padma Bhushan award by the Government of India in 2010. He was born on August 4, 1923 in Anakapalle, Andhra Pradesh, India. He received training in music at a young age from his mother. He also played child artist's role in a few stage plays. But it was music that fascinated him. He started off learning violin learning first lessons from Kambhampati Akkaji Rao who took him to Mangalampally Pattabhiramayya. He continued his studies from Dwaram Venkataswamy Naidu. He accompanied Naidu for many music concerts. Later he learnt music from Sripada Pinakapani, a music legend of that time. Pinakapani influenced him a lot and later he fully concentrated on his career as a vocalist, though he spent many years for violin.

He also served as an administrator and teacher for various educational institutions. He was the Founder President of Viswakala Parishat and has served as a board member of Andhra University, Sri Venkateswara University etc. He also served as a Member of Audition Board and Committee - All India Radio. He authored many music books - Sangeeta Sudha, Deekshithar's Navagraha and Kamalamba Navaavarna Kritis, The Monograph of Tyagaraja's Pancharatna Kritis, Sangeeta Saastra Sudhaarnavam, Vaggeyakara Kriti Sagaram and a few more. He passed away at his residence at Secunderabad on July 11, 2013 at the age of 90 years.