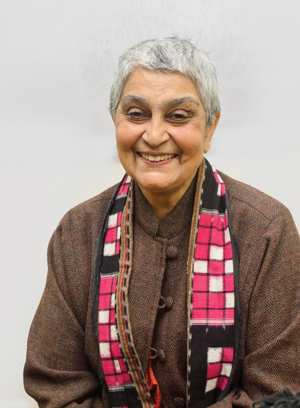 Gayatri Chakravorty Spivak is a University Professor at Columbia University, where she is a founding member of the school's Institute for Comparative Literature and Society. Gayatri Chakravorty Spivak was born in Ballygunge, Kolkata on February 24, 1942. Educated in Calcutta (B.A., 1959) and at the University of Cambridge and Cornell University (Ph.D., 1967), she taught English and comparative literature at the Universities of Iowa, Texas, Pittsburgh, and Pennsylvania and at Columbia University. She was appointed University Professor at Columbia in 2007. In 1976 Spivak published Of Grammatology, an English translation of French deconstructionist philosopher Jacques Derrida’s  De la grammatologie (1967). In a series of later essays Spivak urged women to become involved in, and to intervene in, the evolution of deconstructive theory. She also urged her colleagues to focus on women’s historicity. Critical of “phallogocentric” historical interpretation, Spivak accused “bourgeois” Western feminists of complicity with international capitalism in oppressing and exploiting women of the developing world.

Her critical writings include In Other Worlds: Essays in Cultural Politics (1987), The Post-Colonial Critic (1990), Thinking Academic Freedom in Gendered Post-Coloniality (1992), Outside in the Teaching Machine (1993), A Critique of Postcolonial Reason (1999), Death of a Discipline (2003), and Other Asias (2005). Spivak has received 11 honorary doctorates: University of Toronto, University of London, Oberlin College, Universitat Rovira Virgili, Rabindra Bharati University, Universidad Nacional de San Martín, University of St. Andrews, Université de Vincennes à Saint-Denis, Presidency University, Yale University, University of Ghana-Legon. In 2012, she became the only Indian recipient of the Kyoto Prize, for Thought and Ethics in the category of Arts and Philosophy. In 2013, she was awarded the Padma Bhushan by the government of India.